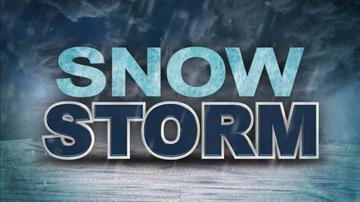 4:44 p.m. The City of South Bend, in conjunction with St. Joseph County and the St. Joseph County Emergency Management Association, will maintain its Disaster Emergency Declaration through 12:00 pm Tuesday, January 7, due to the extreme cold temperatures.

City of South Bend offices will be closed on Tuesday, January 7 with only essential personnel on duty.

I-94 and I-65 have reopened, but conditions remain hazardous and non-emergency travel is strongly discouraged, according to INDOT.

3:45 p.m. The LaGrange County Sheriff has announced they have been having difficulty clearing the roads because of situations where drivers should not be on the road. At 4 p.m. they will begin stopping vehicles on county roads and will cite the drivers.

3:00 p.m. Marshall County offices and courts will be closed on Tuesday because of the weather.

11:21 a.m. INDOT says crews are still out working to clear roads, but drifting snow and low temps are hindering the process. Roads should be considered extremely hazardous and only emergency personnel should be on the roads.

EMERGENCY ROAD CLOSURES (No timeframe for reopening these interstates):

This is a dangerous situation and all are advised to stay home until roadways can be safely cleared.

As of 11:20am, Elkhart County is still under a snow emergency and many of the roadways are still hazardous and some county roads are impassable at this time.  County agencies are working together to alleviate the road conditions; however, blowing and drifting snow and extreme temperatures are making it difficult to keep roadways open.  Citizens are asked to be patient as the as the roadways are being cleared.   Please assist workers by staying off the roadways until the Emergency has been lifted.

We will continue to monitor the status of the snow emergency and will provide updates if conditions should change.  We anticipate sending out an update late this afternoon.

LaGrange County Highway has reported difficulty with heavily drifted snow and visibility due to blowing snow in their attempts to remove from roadways. We are encouraging everyone to stay inside during this emergency and not to travel unless it is an emergency. We are also asking that if you are removing snow from your driveway to NOT place the shoveled/plowed or blowed snow in the roadway. This is creating another set of problems for highway plows.

Please do not call LaGrange County Communications or 911 to ask if you may drive to work, or to inquire as to when the restrictions will end. The dispatch centers are being flooded with unnecessary calls that are taking their attention away from emergency matters.

Emergency travel is exempt from the ordinance. Other exempt vehicles in the emergency Ordinance include: those providing medical assistance, Law Enforcement, Fire Department, Emergency management, Public utility, all fuel hauling vehicles and any employees of the aforementioned services while engaging in their official duties.

The following roads are closed

ISP reminds drivers that in areas where there is a red travel advisory, only emergency personnel should be on the roads.

City crews worked through the night clearing the main arterials. The Mayor stated it is expected that all City streets will be plowed by Monday evening. The City has not declared a snow emergency but the Mayor is concerned about the wind chill factor and suggesting that outdoor activity be restricted unless absolutely essential. The snow shoveling requirement in the City’s right-of-way ordinance will not be enforced on Monday or Tuesday.

5:56 a.m. INDOT: All counties in the northwest district have declared red travel warnings that roads are closed to all but emergency personnel.

5:24 a.m. TRANSPO says all fixed route and ACCESS service will be canceled Monday