Live in Tempe: The man behind the mayhem 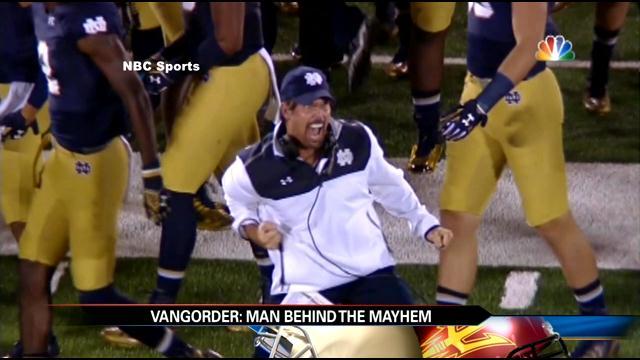 A new face on Notre Dame's sideline is becoming a household name more for his sideline emotions than his blitz packages. Defensive Coordinator Brian Van Gorder is a major reason the Irish are 7-1.

"You talk about trust buying into a system. It's something that we've all done since he got here in the spring and the winter," said Irish linebacker Jaylon Smith.

Saturday's game against Arizona State is Van Gorder's 9th game with the Irish.

He's already making a name for himself.

During the shut out over Michigan in the second game of season, his defense - and his fist pump caught everyone's attention,

The game snapped the Wolverines' NCAA record of 365 games not being shut out.

"Having a guy on the sideline like coach, it's amazing. You definitely feel his vibe with us and it translates to us on the field. We're all in it together," said Smith.

Excitement aside, Van Gorder is getting the job done.

Even though the Irish lost to Florida State, the Seminoles had their lowest score so far this season.

The reason for the early success?

Players attribute their success to being aggressive and stopping big plays, as well as the trust built by having each others' backs.

"When you have that I think guys play to a higher level. And there's also been a high standard that Coach VanGorder set which everyone is striving to reach and everyone wants to be their best in every play," said Matthias Farley, Irish cornerback.

Van Gorder said he thinks the defense is ahead of schedule, but still has a lot of work ahead in speed and development.