Lloose Llamas tie-up traffic on I-94 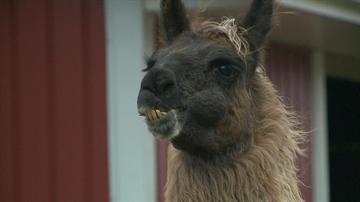 SAWYER, Mich. – Llamas on the loose were responsible for tying up traffic on I-94 near Sawyer on Thursday afternoon.  At around 2:30 p.m. police officers were called in to roundup the twenty escaped animals.

“When I got there we saw the llamas and they were all over the place, one of them jumped the state fence to the highway,” described Officer Todd Taylor of the Chikaming Township Police Department.  “I’ve never dealt with llamas before, a little challenging because they run pretty fast so if you spook them they take off running and then they’re in the highway, traffic as a result of that got backed up pretty bad.”

Officer Taylor was assisted by firefighters from the Chikaming Fire Department, Berrien County Animal Control, Michigan State Police and even drivers from the backed up traffic as he tried to roundup the llama running on the busy highway.  Figuring out where the animals came from wasn’t hard, the Northwind Llama Ranch in Sawyer is right off I-94 on Hilderbrandt Road.

“I got a phone call from Officer Taylor asking if I still worked here and I was like, ‘yes, I do,’ and he goes, ‘well you might want to come down here they’re out on the highway,’” explained Chris Krumrie who works at Northwind.  “It (traffic) actually was pretty backed up as far as I could see.”

Krumrie jumped into action and joined the roundup, bringing food to help bait the llamas back to the ranch.  By the time he got onto I-94 animal control officers already had the llama who had jumped onto the highway under control.

“They restrained the animal, I came up and got a halter, went down and haltered it and had to walk him back down a half mile down the highway, semis going past,” Krumrie described.  “I was getting some pretty weird looks.”

Neighbors and officers helped bring in the rest of the animals who stayed close to the ranch.  Still, the job wasn’t easy.

“What I learned today…if they get lost from their group, then they don’t know what to do so then they just kind of go wherever they want,” Officer Taylor explained, laughing.  “I never thought I was going to have an experience with llamas.”

All twenty llamas were brought back to the ranch, Chris Krumrie explained that high winds probably blew open one of the gates on the fence and the curious animals couldn’t resist the chance to roam.

Aside from being a little hungry, all the escaped llamas were not harmed by the adventure.

“We’ve counted them, sitting down on the computer making sure everyone’s back in their right pastures, everyone’s good, everyone’s accounted for,” Krumrie said.

No accidents occurred during the traffic backups caused by the llamas.  It took about 30-minutes to roundup all the animals.