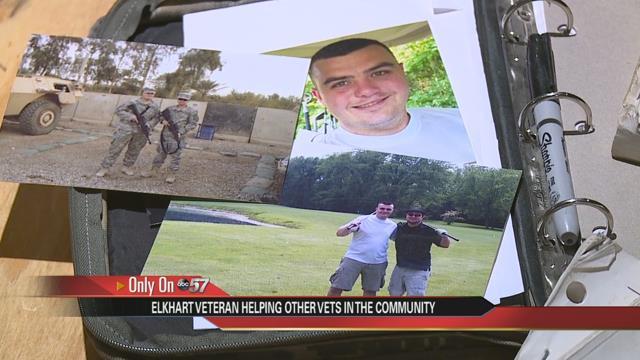 He's is married to Sarah and is a stay at home dad to three kids: Kenny, Bradley, and Addison.

The Elkhart native said that joining the Army at 18 as an Infantryman was God’s calling.

“I just want to jump out of airplanes, that sounds like fun, I want to do that.  Well they got this thing called the Infantry.  What’s that?  You get to blow stuff up.  Alright, I’m in.  Sign me up," said Holmes.

The best part about being in the Army?

Holmes is one of five who run FreedomSystem.org.  It’s a non-profit organization in Michiana helping veterans.

“We work real hard at helping veterans achieve who they can become and close that culture gap between military and civilian life," said Holmes.  “We do a lot of psychiatric help as well, where we do blogs on PTSD and how to cope.”

Freedom System has partnered with other organizations in Michiana such as Scrappers Rescue, Jesse’s Warriors and the DAV.

Some other programs offered by Freedom System are: resume writing and a martial arts class for veterans with PTSD to help them cope with their anxiety.

“Kind of a dream come true to be able to help people that have given so much to us," said Holmes

In addition to helping the veterans they also want to:

So what does Veterans Day mean to him?