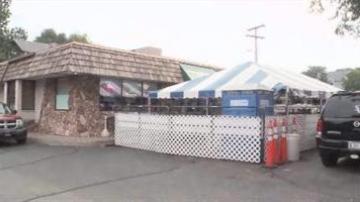 SOUTH BEND, Ind.-- Plenty of people woke up and headed off to their favorite bar or restaurant to catch the Notre Dame football early kick off season opener. Mulligan's Bar and Grill was absolutely packed as ABC 57 pulled up right before the nine O'clock start time.

Sue Mulligan, the co-owner said, "we got about $1,000 dollars worth of food product in for our breakfast Buffet." The bar allowed patrons to eat all they could until the food ran out around noon. One the menu was eggs, bacon, hash browns, biscuits and gravy, sausage and pancakes and syrup.

Sue says Mulligan's generally opens at 11 on Saturdays but for this game her staff clocked in at 5am. When Mulligan's opened at seven she said there was a line at the door.

Michael Emmert was one of the fans, he drove five hours from Cordyon, IN to get here. He said, "actually it was kind of a home game for me getting to come up to Notre Dame and hang out at the bar and watch the game." Emmert has family in the South Bend area and decided to spend the holiday weekend visiting the area.

However, Shane McCarthy a Notre Dame first year graduate student studying engineering came all the way from Cork, Ireland to watch the game at O'Rourke's Public House. McCarthy said, "it's a really big occasion over in Ireland so it's really disappointing not to be over there. Five of us are over here from Ireland to do a masters at Notre Dame."

He says it's not very feasible for them all to travel back to their homeland for the game because they just arrived in the United States just last week. Plus he says they are still learning about the football as a sport.