When the opportunity arose to take over operations at the local staple, Trix knew just the person to team up with.

“Ian and I have been friends for easily over a decade,” Trix said. “It’s amazing. Literally a dream come true.”

Michiana born and trained chef Ian Woodiel grew up helping his mom cook and then trained in places like the Lasalle Grill. He’s racked up over 13 years of experience in the kitchen along the way.

When Trix asked Woodiel to join him in revamping Cheers Pub on S. Dixie Way, the decision was simple. 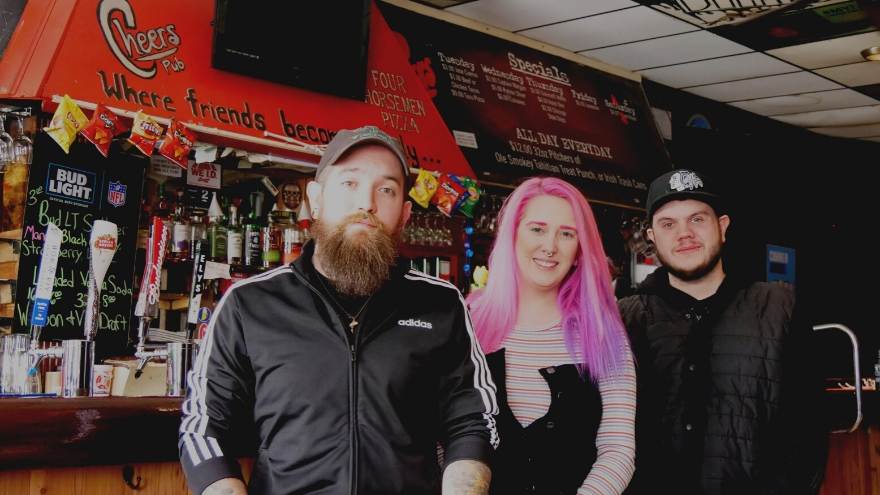 “I’ve always had the dream of doing my own place. I didn’t really know how it would come to be but it’s a pretty cool spot. It has a lot of history, which I’m excited about,” Woodiel said. “I love that we’re going to keep live music and add comedy shows and things like that. We’re taking something that has rich history in the area and sort of updating it.”

Trix, along with his wife Nikki, and Woodiel, bought the bar in December with the help of Steven Mihaljevic, who Trix credits with making it all possible. Over the next two months, renovations will give a new life to the 21+ music venue, restaurant and bar.

“The interior is going to get a pretty big makeover, floors, ceilings, paint. We’re going to completely change the vibe in here, something a little more 80's,” Woodiel said.

The pub will remain open while renovations take place, which are expected to finish up in the spring.

Cheers Pub will keep its current name for the time being, Woodiel said, but the chef is making big changes on the kitchen side of the business.

“The kitchen is going to be a huge renovation. Menu-wise, we’re going to keep the pizzas just because it’s something people are comfortable with and I have two big pizza ovens. I have inherited the recipes so they’re not going to change at all. But then everything else is going to grow a bit, a lot of from-scratch things,” Woodiel said.

Those recipes Woodiel refers to were passed to him from the former Four Horseman Pizza makers.

Food service at the pub is on pause while the kitchen undergoes renovations, but Woodiel hopes to be serving up new menu items like mussels, homemade pretzels and poutine sometime in February.

Deserts, entrees like grilled salmon and steak, burgers and sandwiches will also be featured on the new menu of the restaurant-side of Cheers, named “Woodiel's,” which is pronounced "like an L made of wood, so wood-elles."

“I’ve done the fine dining, I’ve done every range you could possibly imagine. I like sort of that middle ground, where stuff is lighthearted but good and fresh. Not stuffy. Not $40 per plate. I like something that is accessible to everybody,” Woodiel said.

Woodiel and Trix hope that the new Cheers Pub continues to draw its current crowd in but also excite new patrons who may have never even step foot inside before.

“Cheers deserves to be shown off as a staple in this town,” Trix said.