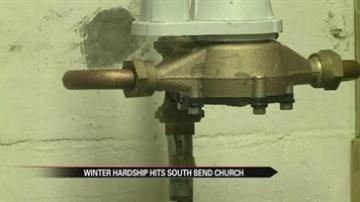 SOUTH BEND, Ind.-- A local church has been plagued with a plethora of winter problems, and the bills are going to cost them thousands of dollars. On Sunday, Kingdom Christian Center Church had their first services with running water in over a month.

In January the church's basement flooded because of a water main break. The city fixed the problem but that was only the beginning.

Days later their furnace stopped working, their plow truck broke down, and then their pipes froze. The unfortunate series of events is going to cost the church over $3,000.

“I really don’t know where the money is going to come from. I know we don’t have that extra money to fix all of this stuff, so it’s going to be a challenge," said Pastor Lee.

Church members said it's one thing after another, but they have hope that the money will show up.

"There’s a reason these things happen. If we wait patiently it will all work out," said Iris Clark.

Clark said her church is no stranger to tragedy. Just five months ago a masked gunman entered their place of worship and opened fire.

No one was hurt, but the bullet hole still remains in the wall as an ever present reminder of the violence in their community.

“We have a lot of faith here. So we knew that God was going to correct it. We didn’t give up. We just kept praying," said Clark.

Pastor Lee said he is working out payment plans with the various contractors.

“It’s a tremendous burden. It was an unexpected expense along with the other things we are faced with because of the weather," said Pastor Lee.

Pastor Lee wanted to remind the community to make sure their faucets are dripping so their pipes don't freeze.

“We do a lot of giving back to the community. And again it’s been a test of faith but as I talked about today, faith is what keeps you going when it seems like you have many obstacles in your way," said Pastor Lee.