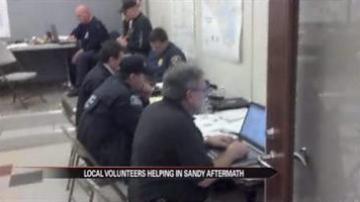 Crews prepared for the worst, but thankfully the Baltimore area did not suffer as much damage as expected.

That is why the group of 15, made up of all local officials and emergency responders, are being reassigned.

As the continue to survey the aftermath of Sandy, crews said it is just too soon to say where they are needed most.

For 12 hours, local emergency responders from St. Joesph County and its seven neighboring counties, worked around the clock as the height of the superstorm reached Baltimore at 2 a.m. Tuesday morning.

"Baltimore was very very lucky. They were very well prepared. I was very impressed with what they had in place," said Penn Township Battalion Chief Al Kirsts.

The local teams joined forces with Baltimore officials, preparing for the worst, but the height of the superstorm did not produce as much damage as expected.

"The number of trees down in the area was in the 250-300 range and we had some flooding. The most significant factor was that we had no deaths within the city limits, only one death in the county where a tree fell on a house," said Kirsts.

Compared to other states across the East Coast, Maryland was rather unscathed by the widespread devastation Sandy caused in other areas.

So, local crews from our area are being reassigned to regions harder-hit by Sandy.

That is where local crews will remain until government officials determine where they will go next.

Local crews said they learned a lot while working in the emergency operations center. They said it is valuable information they can use right here in our community, if ever faced with a similar natural disaster.