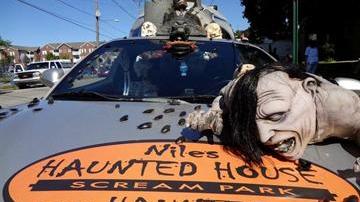 NILES, Mich. - Johnathan Hart wrapped up his first big production in his home state of Michigan this weekend.

The project, a commercial for the Niles Haunted House Scream Park brought in talent from across the state.

"It's not my first horror film," Hart said during the taping.

But it is his firs big production in Michigan.

Hart has worked with big name talent like Bruce Willis and 50 Cent on previous projects. A couple of years ago he started his own production company to work on smaller projects.

"It's been an awesome opportunity," Hart said.

He directed the thriller from top to bottom, bringing in talent from northern Michigan and from those who actually work at the Scream Park in the fall.

The commercial will air at area theaters all across Michiana including Wonderland Movie Theater in Niles.

"We have a group of teens breaking into the Niles Haunted House during the off season and as they start wandering around they discover they aren't alone."

One of those teens is Kelsey Stanko, 18, who is from northern Michigan. This is Stanko's first professional gig out of high school.

"I'm excited for this to come out, it should be good," Stanko said.

ABC 57 exclusively took you inside the production but even we don't know just how the tease ends!

"There might be a character that the fans may recognize, I don't want to give too many spoilers," Hart said.

The schedule for the 2012 season for The Niles Haunted House Scream Park has already been released, click here to see it for yourself.