Local graffiti artist giving back to the community 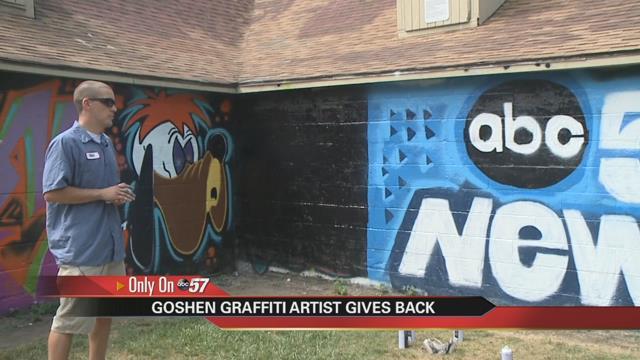 A local graffiti artist is giving back to the community after launching a start-up company.

Several years ago the walls on the Elkhart Art League were painted illegally by graffiti artists and gang members.

According to the president it caused a lot of animosity when they came out and said artists could legally tag the walls on their building.

Shana Dines said, “We’ve had controversy about it, there’s people that don’t like it.”

Now a couple of those artists have started a company doing art for local businesses.

Dines said, “He turned his life around and he wants to be a positive influence with kids. We’re getting older and we would like art to continue to grow in the community, a lot of kids need an artistic outlet.”

Alex Van Galder and Ryan Larson said they both have a criminal past, but art has given them new opportunities.

Van Galder said, "If I would have had a building like the Elkhart Art League when I was younger, I might have not gotten into as much trouble, we grew up painting illegally, painting anything with a surface, anything to really capture an adrenaline rush.”

Galder and Larson painted a mural on the wall of a cartoon and the ABC57 logo.

Van Galder said, “A favorite character of ours we all grew up watching Looney Tunes, we’re 80s babies, this over here is a reproduction of the ABC57 news logo, did that for you guys!”

Van Galder said he's hired 5 other guys who do projects with him through his company.

Galder said, “Basically I don’t want my daughter growing up in an area covered in grimy gang related paint, so I’m tying to do my part to help Elkhart. I feel like our whole community needs to take responsibility for the uplifting of our children who are basically painting our future."

On September 6 from 12-8 VGM will be setting up booth at the South Side Festival in Elkhart.

VGM will also start workshops in September at the Tolson Center in Elkhart to teach kids how to do art.