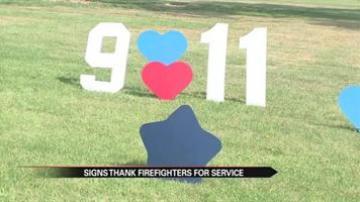 Mayor Pete Buttigieg was among those who attended Wednesday morning's memorial.

The community paid tribute to firefighters who died in New York on September 11th as well as 15 local heroes killed in the line of duty.

Clay Fire Territory remembered the September 11th anniversary with a "ringing of the bell" ceremony at the Freedom Memorial in St. Patrick's County Park.

The memorial contains the Standing Tall sculpture designed by a local artist and a steel beam from Ground Zero in New York.

And one local dentist decided to put up some signs outside the Clay Fire Department to thank the firefighters who went to New York to help after the terrorist attacks.

When firefighters showed up to work they saw the signs at the station.

"It just lets everybody know remember what today is and what happened and not to remember just those that we lost but thank the ones that are here. You know we can thank them every day," said Dr. Mark Shafer, dentist at Bittersweet Family Dentistry.

The Clay Battalion Chief said he was surprised to see the signs and truly appreciates them.