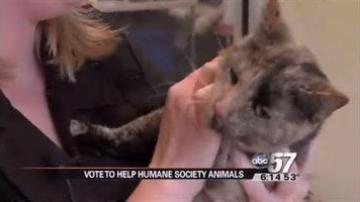 MISHAWAKA, Ind. – The Humane Society of St. Joseph County is asking for the community’s help to win $100,000 to help finish construction in the new facility and aid other programs.

The Humane Society moved into the building in October of 2010, which was funded entirely on grants and donations, but the building is only two-thirds complete.

With money won from the 2012 ASPCA Rachael Ray $100K Challenge, the Humane Society said it could house animals in the new part of the building before putting them in the adoption center.

“It’s the first time we’ve taken part in this. We’re always looking for new opportunities to get new grants for the Humane Society so we can improve the lives of animals here,” said Jenny Carlson, the Humane Society’s Outreach Coordinator. “We are looking to finish phase three, which has a dirt floor right now. And we are trying to get that all finished up so we can house more dogs and cats.”

Carlson said the money would also help fund other programs, including Pet Safe, along with other upgrades in the facility.

“We need funding to help build new cat cages. We convert shower stalls into shower cages for a nice, healthy place for them to live while they’re here,” said Carlson.

Carlson said supporters can head to www.humanesocietystjc.org or www.votetosavelives.org to vote.

The top 50 shelters with the highest number of votes will become the official contestants in the competition, and move on to round two in the fall.

Voting runs from April 5th through the 16th.

During the voting period, the Humane Society is also offering all adoption cats and special dogs at a “Name Your Own Adoption Fee” Price; typically adopters pay $50 for cats and $165 for dogs.

“You can come in, you can get approved. We’re trying to increase the number of adoptions, that’s the whole point of this challenge, to give more pets loving homes,” said Carlson.

Voting is limited one time per day, per computer.