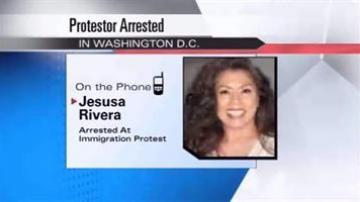 WASHINGTON, D.C. — A Michiana resident was among 40 protesters arrested at an immigration rally outside of the U.S. Capitol Building in Washington, D.C.

Local immigration activist Jesusa Rivera was among those arrested and taken to jail for storming the offices of Congress on Thursday afternoon.

Rivera said they are on day one of a 40 day protest to push for a vote on immigration reform and that Thursday's arrest was both exciting and frustrating but worth it.

"We're here because this is about human lives, the families, really fighting for," said Rivera.

Rivera spent seven hours behind bars and had to pay a $50 fine. She says they are having positive talks with Indiana District Representative Jackie Walorski.