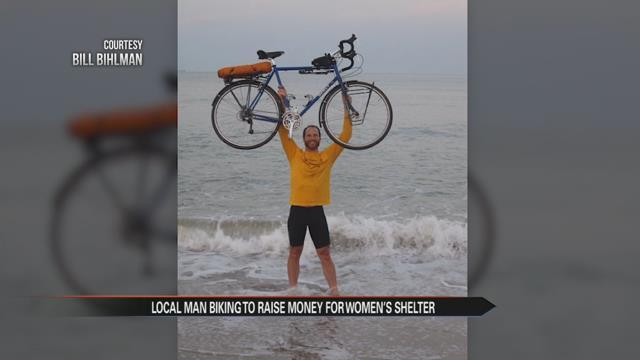 Back in 2013, Bill Bihlman,a regular at the Kroc Center here in South Bend raised money for The O’Connor House and he did it all by using his bike.

The house is a shelter in Carmel, IN that wants to provide homeless pregnant women a safe place to stay.

“So the total ride was four and a half months," said Bihlman.  "Originally the plan was to bike to seven and I ended up visiting nine centers in total.  I started in San Diego which is the original Kroc Center.”

"I was interested in crossing the country on bike and I was intrigued that somebody could do that," Bihlman said.  "And I was looking for somebody to inspire so it was kind of a co-sponsorship between the shelter down in Indy that supported women in crisis pregnancies, and the Kroc Center because I work out here in the Kroc Center.”

“The original plan was to ride from LA to DC but then when I realized that there was this broad Kroc Network a part of the Salvation Army of course is pretty ubiquitous.  I decided to start in Southern Cali and bike to Virginia which is one of the newest Kroc Centers.”

“The hospitality that was extended to me was phenomenal.  And I don’t want to talk about just Christian hospitality I’m talking about people just on the street who opened their homes, offered to feed me, donated to the cause," said Bihlman.  "I was fortunate enough to be able to raise $15,000 for the women in crisis pregnancies shelter in Indy.”

“It’s a relatively small shelter.  It’s about $150,000 annual budget so I thought a percentage of that five thousand would be adequate as the ride unfolded I was able to raise more then I got to a point where I doubled the original riding distance 3,500 miles to around 7,000 miles and then challenged a lot of the people who were supporting me if they would be able to contribute more so it was very humbling to be a part of that," Bihlman said.