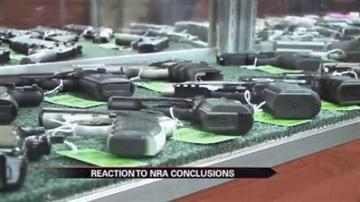 MISHAWAKA, Ind. -- Like many gun dealers on Friday, employees at Midwest Gun Exchange tuned in to see the National Rifle Association issue a stance on last week's school shooting in Connecticut.

"It was refreshing to see that they came out with ideas, solutions and a plan of action on how to put it in place," Brad Rupert, General Manager of Midwest Gun Exchange in Mishawaka, said.

The NRA says such a move could help prevent another national tragedy.

But for area parents picking their children up from school, feelings on the idea are mixed.

"They have guards at banks or at county city buildings," Rebecca Biesbrouck, whose children attend Mishawaka schools, said. "I don't think it would be a bad idea to have a police officer that's trained with guns to be at a school entrance."

"They're trying to go in defense mode to protect our children, but can this particular way of defense backfire?," Tonya Dixon, a concerned parent, asked.

She worries an officer could accidentally kill a child if a fight ever broke out, and security had to intervene.

"We don't know the outcome," Dixon said. "I think they need to look into it and find another way."

She doesn't disagree with bulking up school security, but thinks it's a conversation that needs to happen, something local gun dealers agree with.

"It's the easiest thing to do -- to pass some legislation or throw out some talking points and everybody feels better about the whole situation," Rupert said. "Because it's easy to blame the firearm and not look at the root cause of it: mental illness, poor security and a lack of understanding."