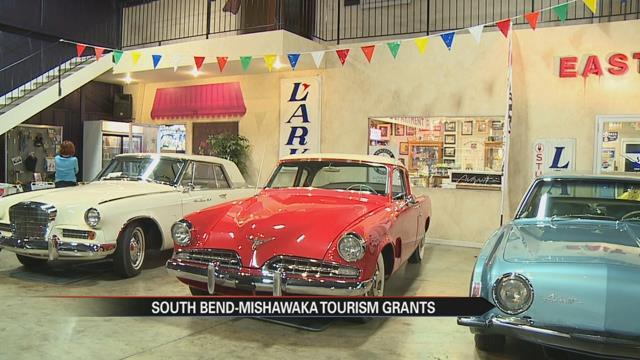 A tourism initiative in St. Joseph County is awarding local organizations with a big chunk of change to help with their marketing.

Visit South Bend Mishawaka is giving 25 organizations a total of $110,000.

“Nearly 8 of 10 people I meet in South Bend, had a father, a grandfather, an uncle, somebody who worked at the plant,” said Tom Curtis President of the Studebaker Drivers Club.

The Studebaker plant closed in the late 60’s but the history is still very much alive within the local chapter of the Studebaker Drivers Club.

“It’s just something you don’t get in any other city that builds cars. It’s so unique to South Bend,” said Curtis.

Every Ma, the non-profit throws a big car show to show off the classic cars made in South Bend.

In 2015 the tourism grant provided by Visit South Bend Mishawaka paid for the advertising for the event.

““The grant money allows us to keep the flame alive. It was just money we didn’t have until the convention grant money,” said Curtis.

It paid off for the club in a big way. Attendance was double from the year before and people from at least 27 states attended.

“We see what they’ve done before the grant, and we seen how the grant has helped them since then,” said Horner.

Horner says it’s not just a “win” for the organizations, but for the city as well.
“It’s over $487 million a year is brought in to our local economy through tourism and this grant just adds to that number and really aids those events and organizations that normally wouldn’t have the marketing dollars to bring those extra visitors in,” said Horner.

Horner says those extra visitors are making a big impact.

“New hotels are popping up all the time because they see the potential on filling those rooms,” said Horner.

The Studebaker Drivers Club will again be receiving $7,500 to go towards marketing their big car show.

“Well it means an awful lot to us. It’s kind of everybody working together and I think it’s good for everybody in the community to raise the awareness for Studebaker,” said Curtis.

This is the 6th year Visit South Bend Mishawaka has been able to provide the money, which totals over a half a million dollars.