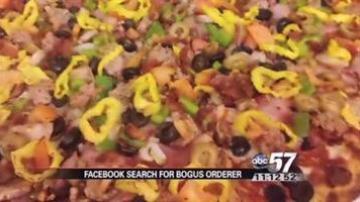 ELKHART, Ind. --  A pizza shop owner is using Facebook to try and track down a fake order.

DC's Pizza in Elkhart said Saturday at 2:30 in the morning, a guy named Sam placed an order totaling $150 and then never showed up to pay for his pizza's.

So the owner is trying to use Facebook to track down the phony order.

Darren Cornell and his wife Rebecca say they were just getting ready to shut down the pizza shop, when they got an order for two large deep dish Smithsonian family size pizzas.

"It has every topping that we have in the house on it.  It has nine meats, nine vegetables, it's got five different sauces and 11 cheeses on it," said DC’s Pizza owner Darren Cornell.

Each Smithsonian pizza weighs 15 pounds so the order totaled $150.

"It was our biggest order of the night", said Cornell.

The party size pizzas take an hour to make, but since the order was so large, they decided to go out of their way and make the customer their order. But the customer, a guy named Sam, wasn't as considerate.

"He never showed up," said Cornell.

He tried calling the customer but he never answered, so he called the cops, then asked for help from his Facebook friends.

"I posted the presumed name and number on Facebook", said Cornell.

DC asked anyone who recognizes the number to come forward and let Sam know how fake orders can effect small businesses.

"It's not a write off or something like it would be for a large company.  It's something that puts food on the table for my daughter," said Cornell.

DC and ABC57 reporter Jessie McDonough tried again to call the no show customer.  He did not answer, but ABC57 left a message.

Cornell also said that if Facebook does not work, he is considering taking the matter to civil court to get his pizzas paid for.