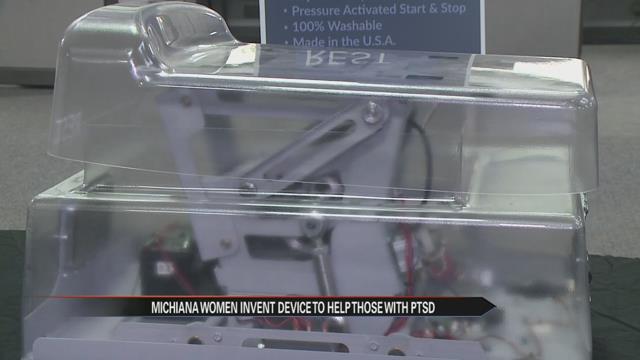 The product was designed at Edgewater Development near St. Joseph, Michigan.

Brown said, “In Greek it’s called hippotherapy, but in English we call it horse therapy. It has been used since the days of the Romans, their warriors were in trouble.”

For centuries, horses have been used to soothe and help people in times of distress. However, horses may not be accessible at all hours of the day for some people.

Phillips said, “They’re not the tidiest and you really don’t want them in your living room.”

Her idea originated after meeting a 9-year-old boy who is a family friend. He suffers from Asperger Syndrome, and riding horses gives him a joy he never felt before.

Phillips said, “The minutes they sat him on the horse, he began to sing, he was the happiest child they had ever seen! And that gave me the idea.”

Phillips and Brown hired Justin Erickson and a team of engineers at Edgewater Development to create the design. They hope to start manufacturing it soon.

Erickson said, “You can tell their passion and drive to get this thing to market has really pressed this project forward.”

An expo will be held at the Blackthorn Golf course on Saturday at their Blue Heron facility so the women can introduce their product to the public.

For more information you can visit their website: http://www.restbygait.com/