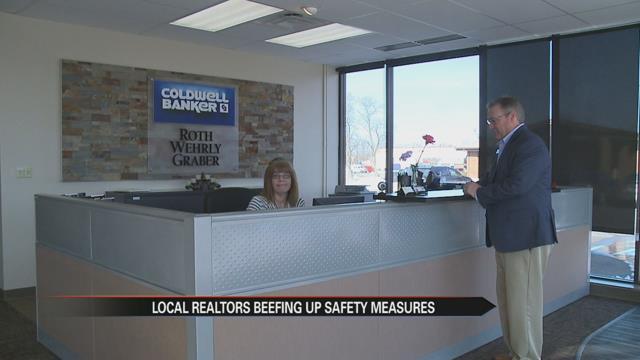 Safety is always on the radar for realtors but industry insiders across the country say they have reason to beef up security measures even more.

President of the Elkhart County Board of Realtors, Tom Canarecci has been in the real estate business for nearly twenty years.

Recently, he says he’s seen a change in the industry. Once signs and newspaper ads were the go-to for real estate advertising, now everything is online.

“You want to promote yourself. So your phone numbers out there, your photos are out there, it’s everywhere,” said Canarecci.

With a realtor’s personal information so easily accessible to the public, Canarecci says safety has become a big concern locally and nationally.

“I think in the last 18 months or so ever since the event in Arkansas where Beverly Carter was so brutally kidnapped and then murdered,” said Canarecci.

Canarecci’s wife is also a realtor.

“Initially my concern was for my wife. But the fact of the matter is nationally there’s a lot of statistics that show men are assaulted just as frequently as women are,” said Canarecci.

According to the National Association of Realtors at least 4% of realtors were victims of a crime last year while on the job. Forty percent say they had an experience where they feared for their safety.

However, over half of realtors said their brokerage does not have standard safety procedures or they didn’t know about them.

But Canarecci says that’s about to change.

“We’re putting more and more emphasis on safety protocol. You need to be precautions; you need to take steps in advance,” said Canarecci.

While no violent incidents have happened to realtors in Michiana, Canarecci says taking those steps in advance could save your life.

He suggests having a set safety protocol to follow in each case.

On a local level new services and safety tools are available for realtors.

Canarecci says his team has been experimenting with new safety apps and are planning on hosting self defense classes with local police.

Canarecci says it’s not just about keeping realtors safe but the client as well.

For those opening up their homes in hopes of a sale, he suggests keeping personal photos and anything that includes your private information out of the home.