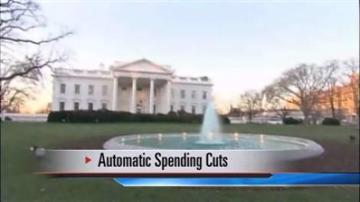 SOUTH BEND, Ind. -- Congress failed to reach an agreement on the sequester, which means automatic spending cuts go into effect at midnight. The cuts will impact a variety of federally funded programs that will affect just about everyone.

From education to public safety, the looming sequester cuts are just hours away and frustration is rampant.

"What I expect the administration to be doing is going line by line, seeing where the fat is and instead it's all about blame,” said Lynn Delehanty of LaPorte County.

"It's a poor way to fix our government's inability to deal with basic economic principles where you have to have more money coming in than coming out or at least have them be equal. So I think it's a tragic failure not to be able to compromise, but this is what it is and now we have to deal with it,” said Adam Cox, senior at Notre Dame.

Dealing with it may be easier said than done.

On the chopping block are a number of public services including, but certainly not limited to public safety, law enforcement, public health and military readiness.

About 2000 fewer low income students in Indiana will receive federal aid to finance college. And more than 1,000 Hoosier students will be denied work study jobs.

The hardest hit area will be the military, which will see cuts of about $64 million in Indiana.