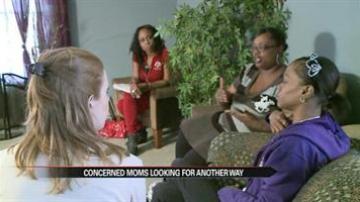 SOUTH BEND, Ind. -- A group of parents started an organization to address the violence in South Bend Schools.

Just a few weeks ago, there was a fight at Adams High School on S. Twyckenham Drive and it was caught on video.

The fight isn't between two students, it's between a student and a teacher.

In the video you can see the student put his hands up in the air and try to walk away, but the teacher counters his every move as other students watch and laugh.

It's just one example of the violence that many are saying has become too frequent in South Bend's schools.

"The video that I saw that happened at Adams High School was very, very, very disrespectful," said Komaneach Wheeler.

Wheeler is a single mother with four children in South Bend Schools.

Wheeler thinks the violence would decrease if the student teacher relationships were better.

In the video, it appears the teacher didn't let him go down the stairs-and a fight broke out.

"The issues could be prevented if everybody is shown the same kind of respect. If everybody could see that this child needs more than this child. Well let's start a group for this particular group of kids," said Wheeler.

That's why she's starting "The Single Mom's Heart Program" to be an outlet for parents who are going through the same thing.

"Her main concern is that the teachers don't care, and they just come to school for a paycheck," said Hudson.

Hudson says being in the group shows her daughter that she cares.

These mothers want to hear your problems.

"Because there's a lot of parents who want do something but don't either know where to start or who to talk to," said Takiya Posey.

We reached out to the school district days in advance of this story to hear what resources they offer for parents and students alike.

They never confirmed a time to meet with us.