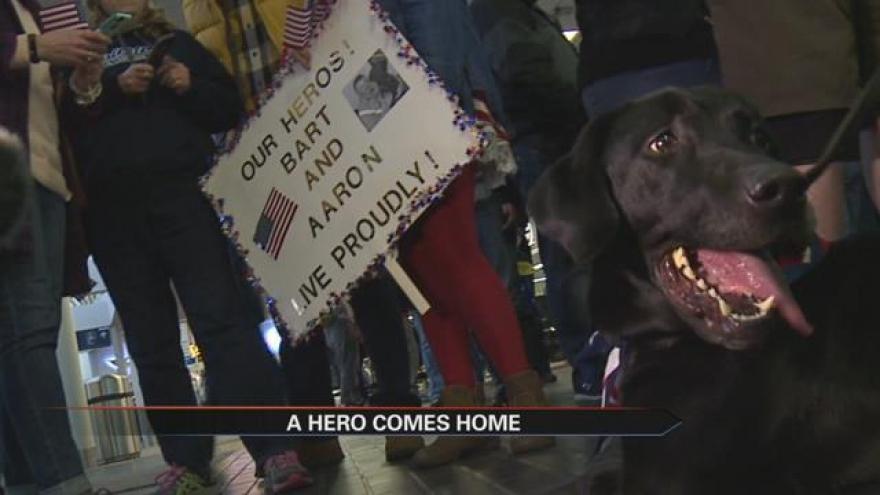 A U.S. Army veteran from Elkhart who was injured while protecting his dog was reunited with him on Saturday.

“I feel happy, I feel content. I have my dog back,” said Sgt. Aaron Yoder.

Their story began in 2012. As an Army dog handler, Sgt. Aaron Yoder was deployed overseas in Afghanistan with his partner Bart.

Bart could sniff out bombs and was a target for the Taliban.

On April 9th when bullets flew in their direction, Sgt. Yoder covered his canine and was hit in the leg.

Sgt. Yoder went through multiple surgeries back in the states but survived and likely saved Bart’s life.

Bart went on to continue his work as a military service dog, sniffing out at least five IEDs over his remaining service years.

Back in the U.S., Sgt. Yoder says it was difficult transitioning back to “regular” life.

“I felt like I had a purpose in the military. My job was to search for explosives with Bart, protect the guys over there. And then to come back here after I got hurt and I have to start all over again, it is difficult,” said Sgt. Yoder.

“I’ve learned as a mom it’s not just Aaron, but everyone who has fought for our country and comes back they’re wounded and it’s hard,” said Dawn.

For Christmas, all her son wanted was his dog back. Dawn was determined to make that happen.

Knowing Bart would soon be retiring, Dawn wrote letters to the Army. They agreed to let Bart spend the rest of his days with Sgt. Yoder.

Dozens of people came to the South Bend International Airport to participate in a flag line, welcoming Bart to the area.

He’s just going to be a dog. Eat sleep and play and do what dogs do, what they’re meant to do. I feel like this is what it’s supposed to be like,” said Sgt. Yoder.