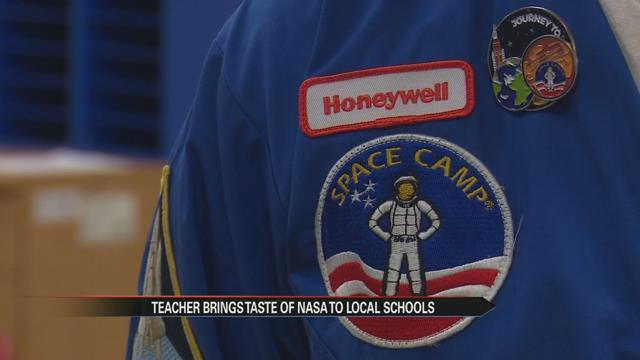 200 teachers from 25 countries were selected for a NASA-led space academy this past summer.

One was from right here in South Bend.

Now, he’s using what he learned to develop STEM-based programs for his students at success academy.

“One of the things that was also so exciting about space camp is that since it was so team-oriented, that’s exactly how we set everything up here. It’s not just about one class being or rising above the rest, it’s about getting everybody to rise up, and it takes a team to do that,” said Chad Roggow, an administrator at Success Academy.

That’s what Chad Roggow learned at the Space Academy this summer.

“All of these major major events that all had to kind of mesh together just to send up one shuttle was absolutely amazing to me, and just to get even a glimpse of that, was just, as a science teacher as I’ve been for so long, just was kind of a dream,” said Roggow.

Their main goal, of course, was to come back with ideas to ignite a passion for STEM subjects in their students, which are success academy’s specialty. Those are science, technology, engineering, and math.

That’s important, because according to the National Center for STEM Elementary Education, by eighth grade, 50% of students will have lost interest in these subjects.

A Georgetown research study showed that by 2018, 8 million jobs in the U.S. economy will require a degree in one of these fields.

Overall, the program reinforced Roggow’s biggest lesson to his students and fellow teachers.

“If nothing else, and I know I’ve gotten so much from this where it is project-based, and all the interest I can bring to teachers and to the classroom with this, it was still about coming up with a common goal, bringing it all together, and working with others no matter what to accomplish the goal,” said Roggow.