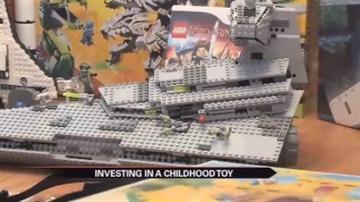 OSCEOLA, Ind.-- It's not just a childhood toy. Seventeen-year-old Joshua Hanlon started investing in Lego at BrickPicker.com. Now he's branched off with his own weekly YouTube show.

"I am one of the younger, there are very few teens that I know that invest in Legos, like I said it's pretty much all adults," said Joshua Hanlon.

He has plenty of legos to keep himself occupied.

On Wednesday nights he uses Google Hangout to host and record a YouTube show.

"So I was like well maybe a Lego show would be cool to do on this podcast network, so I approached the guy who runs it and he agreed to have it on," said Hanlon.

His guests: famous Lego builders, investors like the owners of BrickPicker.com, or just Lego enthusiasts.

"We started it out as a podcast and it was just like a month ago that we switched to doing a YouTube show."

When his YouTube show highlights something impressive, his stuff makes it to popular Lego sites.

"We'll get it posted on there every once in a while, start an interview with someone who's really famous in the Lego community or something and so that episode will get a lot more views than some of our other ones," said Hanlon.

He insists Legos can be just as fun for grown-ups, but he doesn't think his future job will include the building blocks.

"I don't plan on working for Lego this is more of a hobby, I actually am interested really in history and things so I'll probably go into teaching history."

Until then, he'll teach his online students all about the ways Legos can bring you fun and some cash.