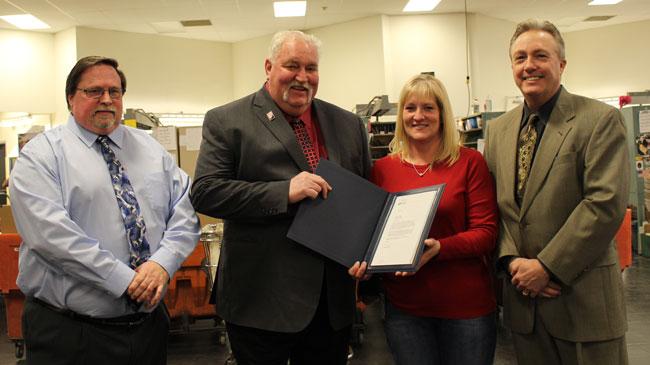 A United States Postal Service rural carrier for the Granger area was honored for helping save a woman's life.

Tracy Swartz was driving in Mishawaka with her daughter when she saw a woman lying on the side of the road with her bicycle nearby.

Swartz stopped to check on the woman, but she was not breathing and there was no pulse.

Another passerby came up and began assisting Swartz with CPR.

When police arrived, they took over CPR. When paramedics arrived, the woman had a faint heart beat, so they used an AED to get a steady heart rhythm.

The woman was taken to St. Joseph Medical Center.

Swartz stopped by the woman's work to check on her and found out the woman was okay.

“The doctors think she suffered a sudden cardiac arrest, and had died almost immediately. Because CPR was started quickly it kept enough oxygen going to her brain to prevent any brain damage,” Swartz said in a press release. “I’m just glad I was in the right place at the right time and was able to help this wife, mother and friend live and continue to be all of those things to the people who love her.”

Four generations of Swartz's family attended the event. They all said they were proud of Swartz and what she did.

Swartz's mother cried with joy during the ceremony.