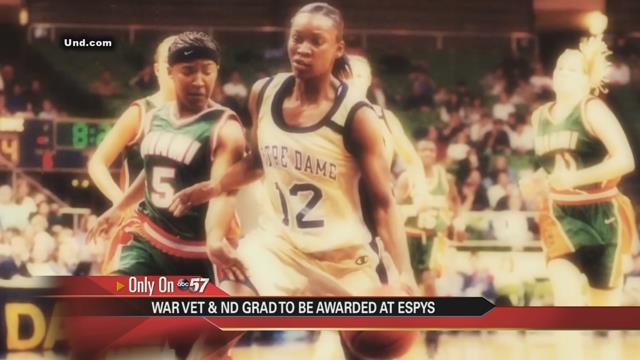 A former Notre Dame Women's Basketball Player who works to help war veterans in South Bend is receiving a national award on Wednesday. Danielle Green will accept the Pat Tillman Award for Service at the ESPY's that air Wednesday on ABC57 at 8 p.m. ET.

On Tuesday Green skyped with ABC57's Alexandra Koehn about the injury she received in an attack in Iraq.

Green said she had a long road to recovery after losing her arm, and now she uses her tragedy to help other veterans as a readjustment counselor at the VA clinic in South Bend.

Green said, “We’re providing readjustment counseling, we’re working with people with post traumatic stress disorder, military sexual trauma, anxiety, difficulties reintegrating back into society, and people who are dealing with moral injury. If you’ve been taught all your life 'thou shall not kill,' and then you have to kill somebody, well now that’s impacted your moral compass.”

Green said the clinic could use more veterans to help those healing from the wounds of war.

On Wednesday, Green will be honored for her bravery, courage and sacrifice at the 2015 ESPY Awards in Los Angeles (8 p.m. ET, ABC) when she is presented with the Pat Tillman Award for Service. The award is named for former Arizona State University and Arizona Cardinals football player Pat Tillman, who gave up his football career to enlist in the U.S. Army and later served in both Iraq and Afghanistan before being killed in the line of duty on April 22, 2004, a little more than one month before Green was injured.

Green will be the second recipient of the award, which was created by the Pat Tillman Foundation in 2014 and presented for the first time last year to Josh Sweeney, himself a Purple Heart recipient and member of the 2014 U.S. Paralympic Sled Hockey Team that won the gold medal in Sochi, Russia.

As a precursor to Wednesday's ESPYs, espnW writer Mechelle Voepel has written a feature article telling Green's story and how the lessons she learned playing at Notre Dame for Hall of Fame head coach Muffet McGraw played a pivotal role in rehabilitating her injuries and setting a new course for her life.