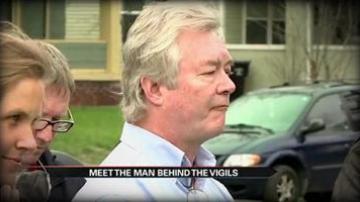 SOUTH BEND, Ind. -- Candlelight vigils are becoming too familiar in South Bend. Since the start of the year there have been six murders in the city. Michael Elliott organizes many of the candlelight vigils for victims of violence.

Each one is covered by local news outlets, but we've never heard Elliott's story. He attends every single one.

"Next Thursday will make five in a row," said Elliott. "It's been a number of years since we've had that many vigils back to back."

Elliott coordinates candlelight vigils. He notifies the family and friends of the victim, the mayor's office, police and clergy.

Then he silently stands among the group and prays.

"People are grateful. The families are grateful that there's the acknowledgement," said Elliott.

He inherited the job from his mother who passed away almost 9 years ago.

"The evening of the viewing I had people asking me what's going to happen to the on-site prayer ministry?" said Elliott.

Elliott stepped up to the task.

Something he says would make his mother proud.

He knows the west side. He's lived there for more than 2 decades.

He works a steady job, but in recent weeks all of his free time has been spent at a vigil.

"You'll have a respite where it's quiet and then all of a sudden for no explanation you'll have a rash of this. So I'm hopeful as the year progresses-- this will quiet down," said Elliott.

The next vigil will be held for 18-year-old Nathan Hall who was shot and killed while riding his bike to work.