On her journeys underwater, Mehlenbeck finds everything from used birthday balloons to sunglasses to baby diapers.

Recently, she’s started finding buckets of golf balls hiding in the sand on the lake’s floor.

“Lately I’ve been finding piles, piles and piles, and in front of houses. Last year was the tipping point. I watched a guy go into his backdoor, come out with baskets full of balls and start whacking them into the lake,” Mehlenbeck said. 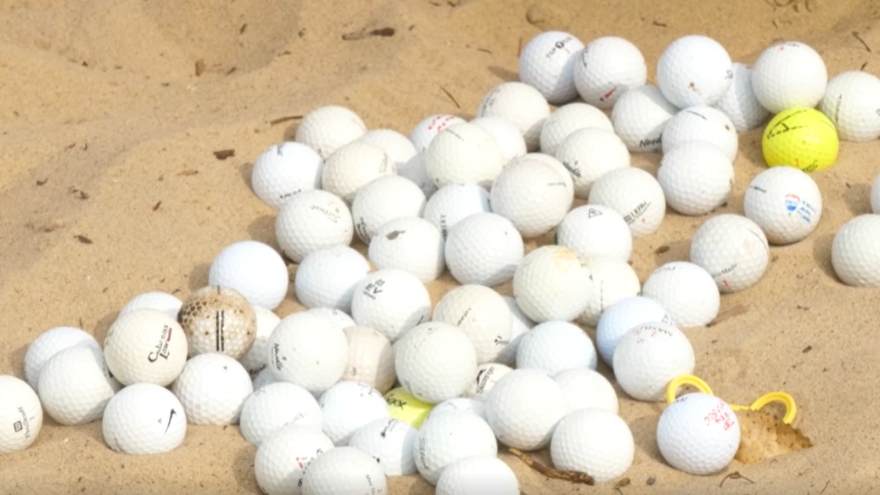 The amount of golf balls that Mehlenbeck collected during one recent dive.

Mehlenbeck hopes that people will stop hitting golf balls into the lake, as she worries not only for the life beneath the water’s surface, but also for the future of the major freshwater source that Lake Michigan serves as.

“It makes me mad is what it feels like, it just makes me mad, it’s like why are we intentionally smacking plastic into the lake,” Mehlenbeck said.

Though she’s reached out to elected officials such as Michigan congressman Fred Upton (R-St. Joseph), Mehlenbeck says that she’s been told that it’s not a federal issue.

It's the utmost importance to our office that her questions are answered and her voice is heard. As a longtime supporter of our Great Lakes, Fred understands her concern for the environmental impact that this may cause. Unfortunately, this is a state/local issue - not a federal one - and we encouraged her to contact her local officials.

Mehlenbeck reached out to the Berrien County Sheriff at the end of June to find out more about the legality of hitting golf balls into the lake.

As of July 19, the sheriff says that the inquiry has been handed over to the prosecutor’s office in order to understand which, if any, state law is being violated by hitting golf balls into the lake.

What happens to golf balls that take up residence in a lake?

Matthew Savoca is a postdoctoral research fellow at Stanford University.  His research passions include how humans affect bodies of water, which pushed him to participate in a study off of the coast of California where a large amount of golf balls were found.

Savoca says that golf balls have two main parts. The core of the ball is made of rubber, which gives it its bounce and spring. The outer shell is a plastic coating and the two parts are glued together.

“When a golf ball gets out to a marine environment, it gets washed around and it is slightly negatively buoyant so you won’t see them floating at the surface,” Savoca said.

The ball doesn’t sink, but instead, is pushed around by waves on the lake floor and the balls break apart, according to Savoca.

“In addition to potential chemical effects, animals are eating these little pieces of plastic,” Savoca said.

Savoca says little is known about the impact this has on marine life.

Watch the video below to hear from researcher Matthew Savoca.