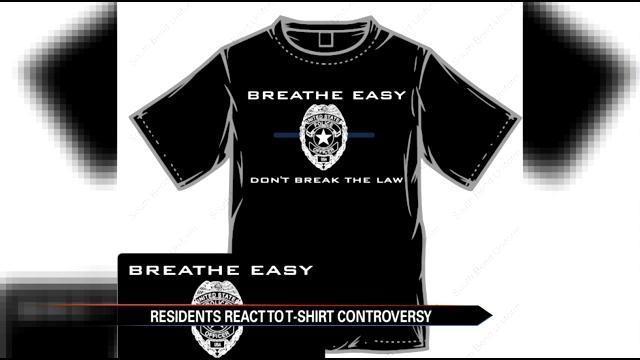 Controversy continues to grow over t-shirts designed by a Mishawaka Police officer's company.

They were created in response to the "I Can't Breathe" shirts worn by the Notre Dame women's basketball team and other athletes around the country.

It is an issue that has people around Michiana talking. In fact, an online petition has been created in response. So far it has gained more than 400 signatures calling for people to stop doing business with the South Bend Uniform company who designed the shirts.

The Mishawaka officer behind them says they are designed to bring harmony to the police and the community they serve. But common council members Henry Davis Jr, Oliver Davis, and Valerie Schey have called it divisive. They want vendors to stop selling the shirt.

And they aren't alone. One man we spoke with told us he doesn't believe the shirt adds anything positive to relations with law enforcement.

"Now everyone is going to pretty much try to pick a side," said John Alexander. "And I think we should try to focus on something much better than the little things. I think we're just going too far with pretty much everything."

Another South Bend man, who chose to not be identified, said he backs the company 100 percent because of first amendment rights.

"I think it's overrated," he said. "If we are given the opportunity to speak our mind and what we believe in, then I think all Americans in this country should be given the right to speak first, then act."