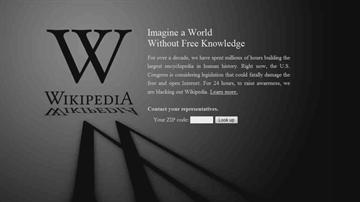 SOUTH BEND, Ind. – A worldwide online protest of proposed anti-piracy laws had some people in Michiana scratching their heads on Wednesday when they logged on to find many of their favorite websites, like Craigslist or Wikipedia, completely shut-down.

"Now I have to consult a legal dictionary instead of Wikipedia," joked Grace Fox, a Notre Dame law student.

Several popular websites shut-down completely and others posted messages showing they opposed the Stop Online Piracy Act (SOPA) and the Protect I-P Act (PIPA) laws being debated by congress.  The laws would give the government more power to combat piracy of copyrighted materials.  But, many are opposed to giving the government power to stop companies from selling online ads to suspected pirate sites or blocking search engines from listing web sites suspected of piracy.

But, many people, like Grace Fox, hadn’t heard of SOPA or PIPA before Wednesday’s black-out.

"I had seen online and Wikipedia had posted some articles about the fact that it was going to shutdown today in protest of whatever congress is doing," Fox said.

Though proponents claim the law is focused on stopping foreign websites from trafficking pirated material in the United States, critics say it will allow the government to censor the internet.

"I think it's actually going to affect sites that aren't really voluntarily participating in the piracy that they're trying to get to and I don't feel like the acts actually get to the root of the problem,” said Andy Davis, who opposes the laws.  “They're just kind of going around it in a way and I don't think that they're really well written."

Davis, whose mother owns a business creating websites, is one of those worried that SOPA and PIPA would restrict the free flow of information on the internet.  Even before Wednesday’s protest, Davis had been fighting against the laws.

"I signed the online petition with the digital signature that Google had going and I shared the link with my Facebook friends so they could participate as well," Davis explained.

Several of the protesting websites called on people to call their representatives in congress and tell them to oppose the bill.  In response to the protest a number of senators withdrew their support for the bill.

Many people around South Bend said they understood both sides of the issue, that companies deserve the right to protect their copyrighted material and the right to free exchange of information on the internet.  But, others, like Grace Fox, said the idea of calling SOPA and PIPA a violation of the First Amendment and censorship was blowing the issue out of proportion.

"I'm not sure exactly how that's censorship,” Fox explained.  “I can see where congress has an interest in protecting other people's property, but I don't know if it's a big enough deal that congress needs to get involved to that extent."

Congress could begin voting on SOPA or PIPA as soon as next week.