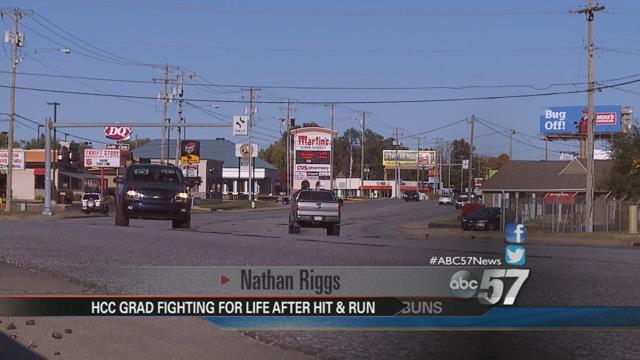 Police say Holy Cross Graduate Stephen Stetz was walking across State Road 23 when he was struck by a Jeep Cherokee.

Witnesses say that the driver of that vehicle, 38-year-old Mark Madejek got out of the car, saw Stetz unconscious on the road and drove away from the scene.

Police later located Madejek and arrested him for leaving the scene of an accident.

Stetz’s former hockey teammates from Holy Cross College say they visited him and relatives in the hospital on Sunday. They say he is still unconscious and has a severe head injury.

Many people familiar with the area say that the tragic incident is part of a much larger issue SR 23 especially on Notre Dame game days.

Every Irish home game Saturday tens of thousands of pedestrians walk along SR 23.

As longtime South Bend resident and manager of Between the Buns Nathan Riggs knows it well.

“After a game, after a big win on these side streets they’ll walk down the middle of the road and that’s just the time where you just ride the brake all day,” said Riggs.

Along with other business owners and employees in the area Riggs says the issues may not be the pedestrians’ fault.

“There’s only two cross walks in close proximity and they have to go to a light and cross the street. You can always have that possibility that somebody is going to step out into the middle of the road so you’ve just got to keep your eyes open more,” said Riggs.