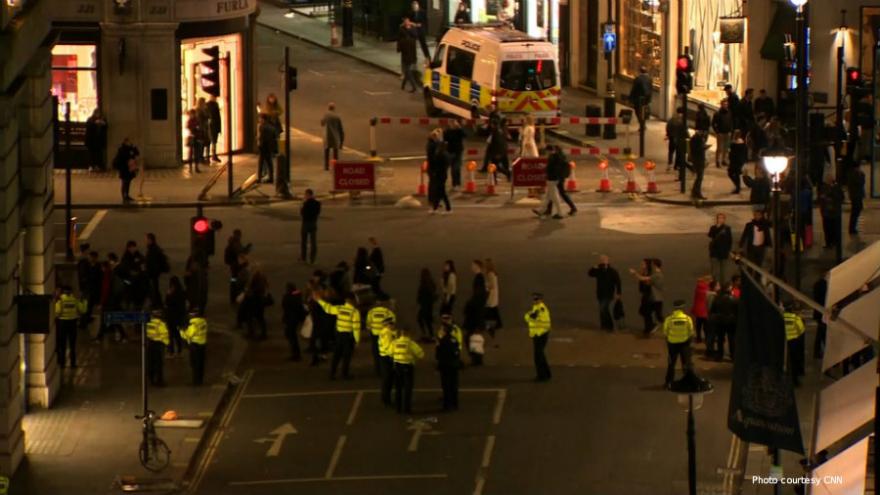 (CNN) -- Authorities in London want to speak with two men about an incident at the Oxford Circus train station Friday, according to a news release from the British Transport Police.

Officials think there was an altercation on a platform at the underground station on Oxford Street, in the heart of the city's shopping district. They released images of the men from surveillance cameras.

The two men "may have information about the incident and the circumstances around (it)," the transport police said. They also appealed for witnesses to come forward about the incident, which caused a mass panic.

Police had received multiple reports of shots fired at 4:38 p.m. on Oxford Street and at the station. They gave no details on what happened, but crowds were seen running down Oxford Street, a shopping strip usually busy with pedestrians and heavy traffic.

Armed police responded to the call and blocked off the area.

The incident happened as throngs of shoppers flocked to the area for Black Friday retail sales.

Oxford Circus station was evacuated, while thousands of people were cordoned away from the area as a large police presence descended on the scene. Many people took shelter in nearby buildings.

British Transport Police said they had a report of one woman suffering minor injuries while leaving Oxford Circus station. They reported no other people hurt, and said their response to the incident has now been "stood down."

Metropolitan Police said there was no evidence of shots being fired.

The cause of the initial reports was not clear late Friday, but the fast and organized police response was a reminder that London is a city on high alert, after a string of terror attacks this year.