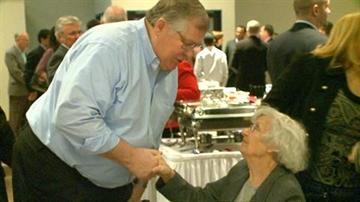 MISHAWAKA, Ind. – It was the biggest fundraising event for Democrats all year, and perhaps one of the few opportunities rank and file dems have to hobnob with candidates running in big ticket races; but it was also a time of reflection on the contributions two men have had on the party and their constituents.

Robert Kovach first fell in love with politics working at a gas station in Mishawaka as a young man. He would eavesdrop on local politicians while pumping their gas or washing their windshields.

After finishing college Kovach returned to Mishawaka and ran for a city council at large seat. He won and took office when he was 25 years old.

From there his political career has spanned decades. He’s served the people in Mishawaka as Mayor, and Indiana in the statehouse.

Thursday he shared many happy memories, and recalled a not so joyous one from his time in the statehouse. “It was a lobbyist regulation bill, which was a nightmare to work with and I wish I’d never seen it,” said Kovach.

According to him, he has always had a soft spot for education and teachers. He has been on three school boards in his life time.

Currently he is a St. Joseph County Commissioner, but not for much longer.

Kovach has decided not to run for re-election. He plans to finish out his term and leave politics, again.

Kovach does not have specific plans laid out for his post-political life, though he would like to volunteer and expects to stay active in the Democrat Party, if only behind the scenes.

St. Joseph County Probate Court Judge Peter Nemeth was also honored for his six decades of service, at the dinner.