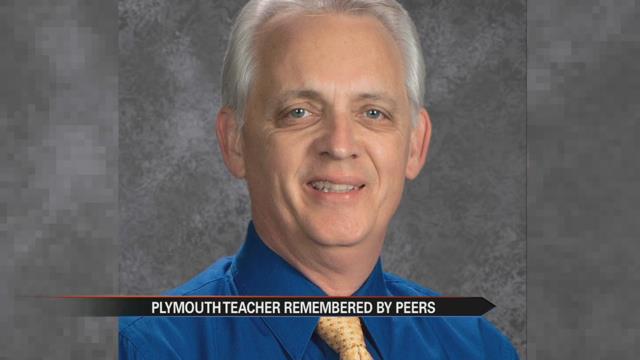 The city of Plymouth is mourning the sudden loss of a beloved music teacher who retired just last month.

“Whatever he ever did, he put his heart and soul into it,” retired Plymouth High School teacher Janice Curtis said.

And that’s how those who knew Plymouth music teacher Bob Pickell best say he should be remembered.

“It was almost that he lived by this belief…that you gotta make every place that you go to better,” Plymouth High School teacher Laura Kruyer said. “From the time that you come to the time that you leave…that is really your responsibility as a person; is to get involved and make the place better.”

Pickell died suddenly Friday night after falling through his home’s attic onto his cement garage floor.

The music teacher – known for his bow ties, his contagious personality and his love for his students and family – retired from the Plymouth Community School Corporation just last month, ending a storied 38-year career.

“I don’t think anybody didn’t like Bob,” retired Plymouth High School teacher Kennedy Robinson said. “The kids all loved him.”

Longtime friends and former coworkers gathered outside Plymouth High School Saturday to honor Pickell, including Robinson, who started teaching with Pickell back in 1978.

The two shared a birthday and had a rare opportunity to celebrate together just four days ago with lunch and cupcakes.

“I’ve thought about that [celebration] for the last 24 hours, since I’ve heard [about Pickell’s death],” Robinson said. “That’s all I can think about.”

Pickell’s friends say he was always positive, enthusiastic and managed to bring the best out of the thousands of students he taught throughout the years.

“And he used that talent that he had with music to really reach out to kids, and many kids who were very shy, to help bring them out of their shell,” Kruyer said. “So Bob was really about community.”

Pickell is survived by his wife and two sons, who said they were not yet ready to speak out.

Former students of Pickell’s also stopped by the high school to honor him Saturday, including one student who had Pickell for seven years in the 1980s and 1990s. She described him as the ultimate teacher and mentor.

Two little girls who had Pickell for music this last year said he was “more than a teacher, he was a friend.”