Lots of snow means lots of work for plow drivers 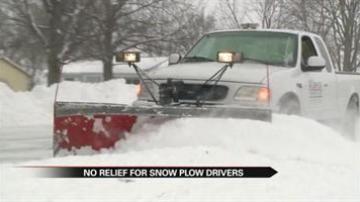 "A lot of the guys have been plowing with a few hours of sleep here and there," said Ken Alkire, owner of Midwest Property Care.

"The guys are energetic when it is time to plow snow because it's money," said Alkire.

"It's tough in the morning because usually you sleep three to four hours between here and there what you can, plus other guys have full time jobs," said Alkire.

Ken Alkire has been plowing snow for over 25 years.

He says so far this season has brought in a lot of money.

"We usually don't get this much snow, so you got to take it while it's there especially to make a living and for a lot of guys that's just what we are doing, we are making a living," said Alkire.

Running on very little sleep, the plow drivers are trying to be as cautious as possible.