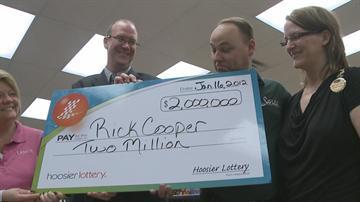 It was business as usual at Sands Office Equipment, Cooper joked with his co-workers that still, no one believes he won the lottery, “It’s like the boy who cried wolf right, it’s just like eh, whatever, he just wants a day off.”

On Wednesday the notorious prankster went to the Handy Dandy gas station on Plaza Drive in Warsaw on his lunch break to get a bottle of soda pop and a $10 scratch-off ticket. When he got back into his car, Cooper said, “I took a couple drinks of my pop, scratched it off and ta-da!”

Cooper won a whopping $2 million, “I couldn’t believe it I thought it was too good to be true, I mean it was unbelievable.” But his lunch hour was over, so Cooper went back to work, asked for the rest of the day off and called his wife.

Everyone, even his wife April thought this was another one of Cooper’s pranks,” He said $2 million and I said you’re kidding, you’re lying.”

“She said more than that,” Cooper said, “She said, if you’re lying I’m going to do one of two things, I’m either going to kill you or I’m going to divorce you and I was not lying and she didn’t do either of those things,” Cooper said as he laughed.

That day the two drove to Indianapolis to get cash in their winnings, Cooper decided to get all the money in one big lump sum. For a family who used to live paycheck to paycheck, A Cooper said this was a huge weight lifted off their shoulders, “Being able to lay down at night knowing that you’re going to be okay.”

The family fell into debt when one of their kids had to undergo a series of surgeries last year, but now all of their debt and financial worries are gone. A Cooper said it didn’t sink in until she got a call from a bill collector the morning after they won, “I looked at the number of I knew who it was and for the first time I’m like, I could answer that, but I’m not going to answer it right now I’m going to go back to sleep and I’ll pay it later.”

The couple has seven children the oldest is 14, the youngest, 2-years-old, A. Cooper said, “I don’t think they get it, money doesn’t mean much to kids.” But all of the children went crazy when they heard about the family vacation and their new addition, “They’re excited about Disney World, but really excited about getting a puppy,” Cooper said.

So far, the Coopers have bought two cars a Ford Fusion for Rick to use for work and a brand new Lincoln Navigator for April, a vehicle with enough seating for all of their kids. A. Cooper said, “They didn’t really get it, but now driving in the navigator, they’re starting to get it.”

The family currently lives in an apartment in Plymouth, but plan on purchasing a new home. After the cars, the vacation, the puppy and the house, the Coopers said they will help take care of other family members and setup college funds for all of their kids.

Both have kept their jobs and will continue to work as they live a normal, more comfortable life.