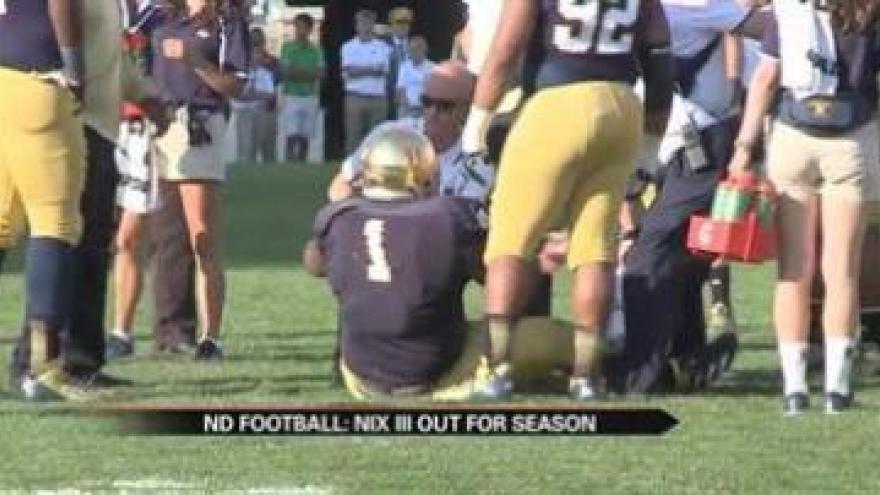 NOTRE DAME, Ind.-- Just hours after undergoing surgery Thursday morning, Louis Nix III met with ABC 57 to talk about his decision to have an operation on his torn meniscus, an operation that will leave him sidelined for the final two regular season games and a bowl game.

After battling knee pain through most of this season, Louis Nix got a second opinion from his doctors and made the tough decision to go through with the surgery.

"Both [doctors] thought it would be best if I just get the surgery now, despite me wanting to play still, they think it's best for my health," Irish nose guard Louis Nix III said.

"It just got to the point where, Lou really tried to fight through it the best he could, and he was not going to be able to play at a level where he could really help the team and he did not want to hurt the team," Head Coach Brian Kelly said.

The hardest part for Big Lou is knowing he won't be able to take the field with his teammates on Senior Day and for the rest of this season.

"This hurts me because I can't do anything but at this point I'll just be the biggest cheerleader on the sideline, support my guys," Nix said.

And now, more than ever, the Irish want a win Saturday over BYU for the seniors.

"Wanting to win for the seniors, particularly, him not being able to play I think adds to that," Kelly said.

While recovering, Nix says he cannot stand for long periods of time, so he will not be able to watch from the sidelines this week.

"I love being on the sideline, I love the energy at Notre Dame Stadium, a lot of people do, and just being out there is exciting. It won't be the same being in the locker room," Nix said.

Nix has one more year of eligibility and says his future is undecided on whether he will return to Notre Dame or go to the NFL, however, he will be one of the 33 seniors honored before the game this Saturday. Kelly says Nix will be able to walk out on the field for the ceremony with his mom.