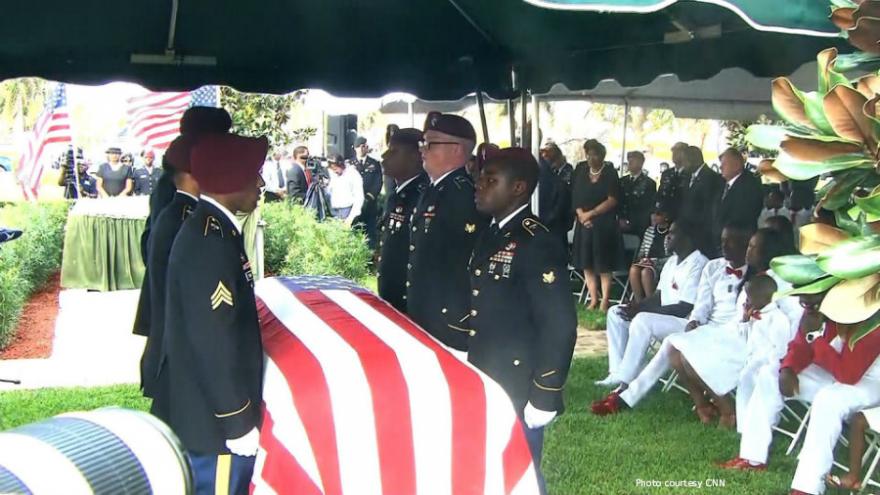 (CNN) -- Loved ones bid their farewells Saturday at a private funeral for Army Sgt. La David Johnson, one of four US soldiers killed in Niger, whose death has been at the center of a public dispute this week between President Donald Trump and a congresswoman.

Flags flew at half-staff across Florida as Johnson's remains were transported early Saturday afternoon for burial following the closed-door service at Christ the Rock Community Church in Cooper City.

"Reality just hit me, and it was like, he's really gone, and I'm not going to ever have my brother anymore," Johnson's sister, Terkiya McGriff, told CNN affiliate WSVN on Friday night.

An estimated 1,000 people attended the service, according to Cooper City spokeswoman Michelle Alvarez, with "a few hundred" having to stand.

Local residents waved flags and watched from the roadside as the processional accompanied Johnson's remains from the church to Hollywood Memorial Gardens for burial.

Several dozen Special Forces members were waiting there to receive the casket, according to Beth Riordan, director of public affairs for the 1st Special Forces Command (Airborne) based at Fort Bragg, North Carolina.

The American flag draped over Johnson's casket was folded and given to his widow, Myeshia, and two other flags were presented to the couple's daughter and son.

Johnson was honored at a public wake and memorial service Friday at the Cooper City church, WSVN reported.

A father and a 'Wheelie King'

Johnson, 25, was raised by his aunt and her husband in South Florida after Johnson's mother died in 1999, according to his obituary on a funeral home website. Growing up, he enjoyed playing football and met his future wife, who now is pregnant with their third child.

Before joining the Army in 2014, Johnson was an employee in the produce department at Walmart, where he became known as "Wheelie King" because he commuted to work on a bicycle with no front wheel, the obituary said.

As relatives and friends gathered Saturday to celebrate his life, the circumstances of his death remained murky. US officials were still investigating how the sergeant, whose body was found a mile from the ambush site, got separated from his team. A search-and-rescue operation by US, French and Nigerian troops recovered his remains 48 hours after the attack by ISIS fighters.

A phone call and a controversy

Johnson's death has become the focus of a feud between Trump and US Rep. Frederica Wilson, a Florida Democrat, who spoke at Johnson's funeral.

Wilson on Tuesday said Trump had been disrespectful during a phone call he made to Johnson's widow, telling her that her late husband "knew what he signed up for, but I guess it still hurt." Wilson has said she overhead the call on speakerphone.

Trump accused Wilson of fabricating her account, but a family member who also was present at the time of the call confirmed to CNN on Wednesday that Wilson's recollection of the conversation was "very accurate."

White House Chief of Staff John Kelly, a Gold Star father himself, indicated Thursday that he advised Trump to offer those words. He said he was incensed that Wilson revealed details of what he deemed to be a "sacred" conversation.