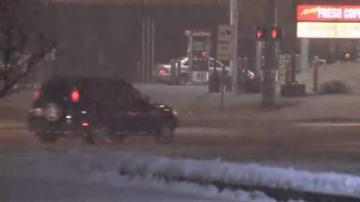 SOUTH BEND, Ind.-- Visibility is very limited as a wintery mix blurs both the roadways and driver's windshields across Michiana. Headlights now create a distracting glare, but just hours ago it was a different story.

Jimmy John's delivery driver Ryan Mawhorr's been on the roads for hours.

"In the beginning it was alright," said Mawhorr. "It was just a little bit of rain and right about now it's starting to get really slick with the slush and everything."

He'll venture out for at least ten more deliveries before 11:30 p.m.

"I try to stop earlier before a stop sign or anything and I try not to take it too fast on the curb," said Mawhorr. "Otherwise it'll just slide right off."

His job requires him to fight the flakes, while another Michiana man is capitalizing on the bad weather.

"I am way overdue on getting a hair cut and I needed one tonight," said Rick Gonsiorek, Holy Cross College. "I called ahead and they didnt have anyone in there so I decided to come on in."

But he says he took his time getting to there.

"I'm the guy that drives slow, sorry about that if you're driving behind me," said Gonsiorek.

Most drivers were on the same page and exercised caution while making turns and approaching stop lights.

"It is pretty slick out there," said Gonsiorek. "Just gotta slow down and take your time. l'm not in a rush getting any place. Just gotta understand it's Mother Nature."

Even Mawhorr, normally proud of his delivery speed, lays off the gas pedal.

"We can't speed obviously, so the speed comes from them making the sandwiches quickly and getting out the orders quick," said Mawhorr.