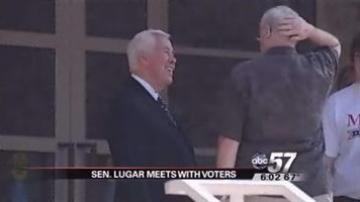 INDIANAPOLIS -- All eyes are on Republican Senator Dick Lugar -- who is fighting for his political life.

The 80-year-old is going up against Richard Mourdock, a Tea Party favorite.

On Tuesday, he talked to voters in Indianapolis, and responded to critics who said Lugar is too old and out of touch with Hoosiers.

"I'm very grateful that God has given me the strength and vigor but we have it. We want to continue to exemplify it in service of our country and with the very best interest of all Hoosiers," said Lugar.

Lugar is seeking a seventh term. He is currently the longest serving Republican in the Senate.