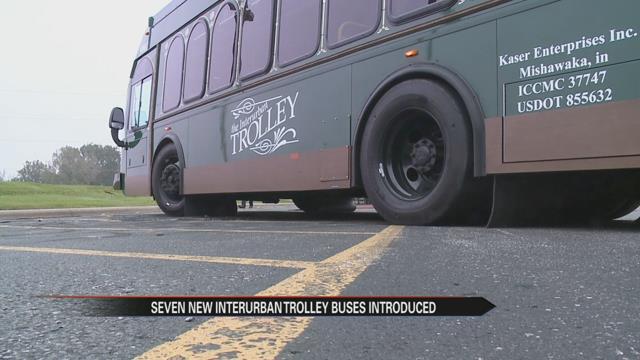 Michiana Area Council of Governments introduced a new fleet of buses. The ride is expected to get a lot smoother for public transportation passengers in Elkhart and Goshen.

Brand new buses with brand new accessories will welcome all passengers on the Interurban Trolley and even save some their jobs.

“People were losing their jobs because they have a point system here – you late three times you gone,” explains Carl Jackson.

Jackson is an Elkhart resident who rides the Interurban Trolley. Jackson says broken down buses meant more time at stops and less time on the job.

“But now with these people can keep their jobs now because it’s more dependable because of the new buses,” says Jackson

James Turnwald, Executive Director of MACOG says news buses had to be ordered after noting the old fleet of trolley buses was not doing the job.

”We really just want to make sure that we are delivering a quality product and that starts with these new buses,” says Turnwald.

Turnwald ordered seven new trolley buses to replace the current fleet. Three new buses are currently in use and the rest will be ready by the end of this month.

“These will last us for 12 years or 500,000 miles so they are a significant investment,” says Turnwald.

The old fleet had a useful life of 200,000 miles and passengers like Jackson say they were past their expiration date.

“I would say they are 100 times better they ride smoother. The major thing is in the old ones when you seat in them your back was hurting and everything because they didn’t have cushion but these are more comfortable,” says Jackson.

Turnwald adds in the next two month he plans to have a GPS tracker on the fleet so that you can track your ride in real time.