Made in Michiana: Greenbush Brewing Co. 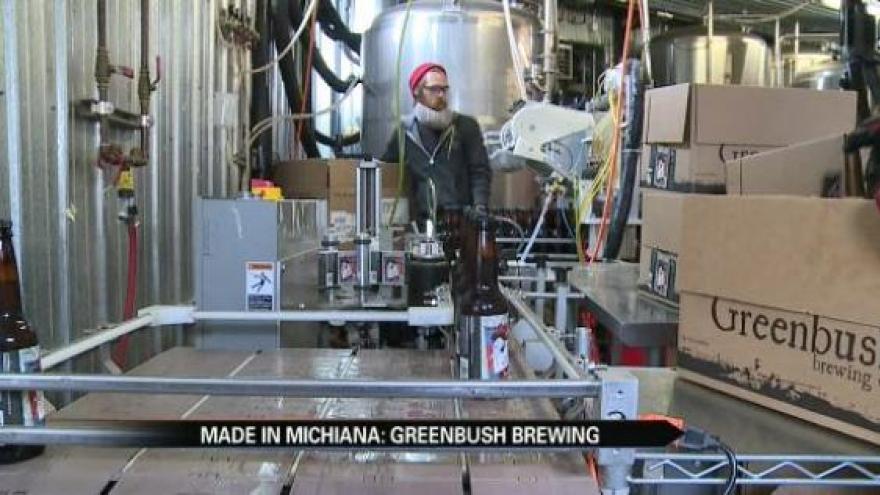 SAWYER, Mich. - Greenbush Brewing Co. opened its doors just four years ago for what was suppose to be a soft opening. Little did they know it would be an instant success.

"The next day on our grand opening 500 plus people came in," said owner Scott Sullivan.  "We ran out of beer three weeks later. We had to close for five days over fourth of July weekend just to build stock back up."

Sullivan and his partners envisioned Greenbush as more of mom and pop operation, but beer lovers across southwest Michigan and the Midwest had other plans.

"I think we figured out in the first few days that it wasn't going to pan out the way we thought and that we had to basically reconfigure what we were doing," said Sullivan.

They quickly hired a full staff that now tops out at 80 employees. As for the beer, guests couldn't get seem to enough and the brewing went into overdrive.

"I think our projection was 350 barrels in our first year, and I think our first calendar year was like 2,400," said Sullivan.

Most of the brewing operations are tucked just behind the taproom, with head brewer Peter Hasbrock at the helm. Hasbrock has kept a high standard for the beer, one that seems to keep people coming back for more.

"The only thing that we have to abide by is nothing under 6 percent," said Hasbrock. "So we do what we consider to be more high gravity brewing."

That recipe is now reaching beyond the taproom. Two years ago the company started bottling its beer and sending it out to stores and bars all across Michigan, Indiana and Illinois.

At a time where beer is as in fashion as wine, you have to be ready to meet the many different tastes of customers. A challenge Greenbush has met and exceeded time and again.

"If you count draft we will be having 35-40 different types of beer that will be hitting the market at some point throughout the year," said Sullivan. "Then there is a bunch of other things that you can only get here or across the street at the annex."

Speaking of the annex, it's Greenbush's latest addition. The staff is still putting finishing touches on it, but it includes a merchandise shop, plenty of patio seating and outdoor games to keep you entertained while sampling their latest brews. Just another way they hope to make their customers feel at home.

"People like hanging out here. It's a warm inviting place," said Sullivan. "We treat it like a traditional public house. It's kid friendly."

"We are about community and sitting down at the bar and having a pint with a random stranger and striking up a conversation," added Hasbrock.

That dynamic has kept the place packed since day one and helped put Sawyer on the map.

"That's been the best part to see a town that I grew up in where there was nothing really going on just kind of springing to life," said Sullivan.

The company has no plans of stopping. Work is already in progress to double in size and put even more people to work creating some of the Midwest's best brews, all made in Michiana.