Made in Michiana: space program technology 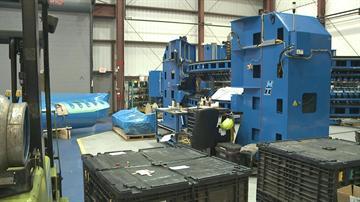 SOUTH BEND, Ind. – Two pieces of what was once, and still could be, valuable technology sit unused in a South Bend warehouse.  Three large circumferential welders, built to build rocket fuel tanks, were constructed by Manufacturing Technology at a cost of around $18-million in taxpayer money.  One has been put to use, but for two of the machines are still in South Bend.

“These were built for the ARES rocket which was part of the Constellation program that was recently cancelled,” explained Dan Adams, part owner of Manufacturing Technology.

When NASA funding was cut back, the Constellation program was scrapped.  But, the work for Manufacturing Technology was paid for and they built the welders.  The company is one of two in the United States capable of building large friction stir welding machines.  Basically, these machines take two pieces of metal, superheat them until they are able to be “stirred” together into what is essentially one piece of metal.

“The nice thing about friction welding is it allows you to use very thin material with a very strong joint,” Adams explained.  “So for every pound of material that they can save in the construction of the rocket, they can send another pound of payload into space.”

The bonds are strong and creates a lighter finished product than other welding technology.  Lighter metals mean lighter rockets, which is why NASA pursued the technology for rockets.  The machines built by Manufacturing Technology were to use this technology to build 120-foot tall rocket fuel tanks.  But, now that the budget’s been cut back, the two machines still in South Bend don’t have a bright future.

“These two machines will go to the Michoud Assembly Facility, but we have orders from NASA not to install these machines,” Adams explained.  “They’re going to sit in shrink-wrapped containers until they decide what to do with them.”

Right now, NASA doesn’t have a use for the machines built for a specific kind of rocket that won’t be used anymore.  But, the cut-back didn’t affect Manufacturing Technology until the company tried to use the experience they’d gained in building the machines.

“We’re at 135 people right now, down from 150 as a result of our Russian issue,” Adams described.
The “Russian issue,” occurred when the company tried to contract to build similar machines for a Russian rocket manufacturer.

The issue was that these machines could be used to build ballistic missiles.  But, according to Adams, the friction welding technology used to build the machines is available across the world and nobody uses the type of fuel tanks the machines build in ballistic missiles.  Nevertheless, despite the government promoting companies to export space technology to other nations, the contract wasn’t approved.  Still, Manufacturing Technology is hopeful for the future.

“There is an effort right now, called the SLS, which is a heavy lift rocket and we should be a leading contender for equipment to support that rocket program,” Adams explained.

Even without working for space programs, Manufacturing Technology is still doing well.

“We do a lot of cool stuff, we export machines all over the world,” Adams described.  “We’re a pretty well kept secret unfortunately.”

The factory floor in Manufacturing Technology is filled with different welding machines that build different products.  Everything from air conditioner parts to diesel engine parts.  Aside from that, there’s hope for the future.

“Based on what we see and what our suppliers see 2012 should be a strong year,” Adams described.

Adams said that, since his company builds machines that help build other products, they are a good economic indicator for manufacturing.  According to Adams, manufacturing is on its way up.