Made in Michiana: Tailgater's Kitchen 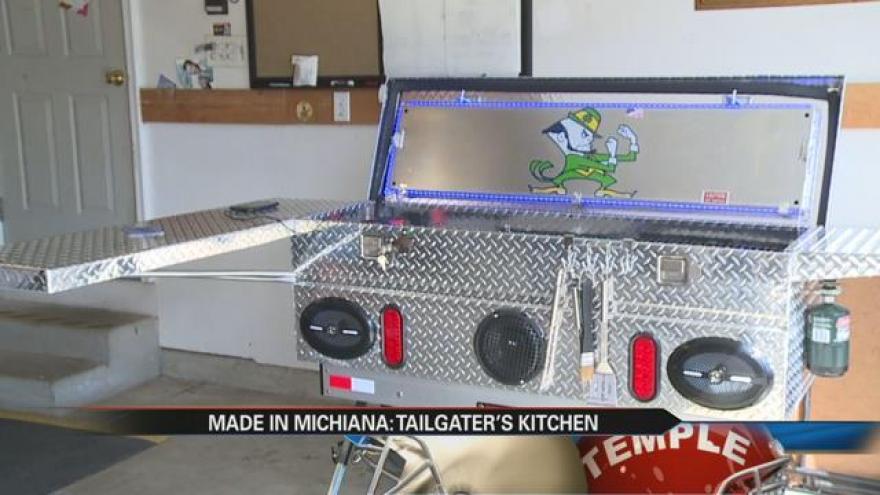 If you're looking for a way to elevate your tailgating experience, but don't want to break the bank we may have just the thing for you. ABC 57's morning team took a short trip down to Mishawaka for our Made in Michiana: Football Edition.

If you look inside Greg Klosinski and Darin Sego,s Mishawaka garage you can tell they have a love for tailgating, but now they've managed to turn that love into a business.

"Greg and I were just talking and we were looking for a better way to tailgate," said Sego. "We drew something up on paper and came up with this idea."

Greg and Darin have been tailgating together since they were 18-years-old. So when it came to the design they knew exactly what they needed.

"We sketched it out," said Klosinski. "The next thing you know we decided hey we can do this so we started building it."

"I think a lot of it was just the hassle of hauling everything back and forth," said Sego. "You know you throw everything in the truck. You have to get it all out. You have to set up card tables. Where this is all inclusive. You just open a lid and everything is right there."

It's called the Tailgater's Kitchen. It comes fully loaded with a grill, 240 square inches of cooking space, gas, a 36-quart cooler and a sound system that can really get the party going.

"The whole thing is twelve volts," said Sego. "It needs a twelve volt power supply. If you start running a crock pot and things like that you will have to start your car periodically. But that's pretty typical with any power inverter."

Since we met the guys, some visions for the future have already become a reality.

"One of the ideas for the future is we want to add a stand behind it that will hold a panel TV above it and another thing is a kegerator for the small craft beers," said Sego.

So by now you may be wondering how you haul it. Well that's pretty simple.

"This slides right into the receiver on your hitch. Standard receiver like you pull a camper or anything with," said Sego. "You don't have to have a license plate for it or anything. It does have tail lights on the unit as well so if it blocks your taillights then you still have the taillights for your vehicle."

"All you do is put the legs down and you can actually put it on the legs and move it away from the vehicle," added Klosinski.

If you're not a Notre Dame or Michigan fan, not to worry.

"Whatever you want, we'll make it," said Sego. "We want to hit some pro games and we also thought this would be a good fit for NASCAR as well."

The guys are hoping to crank out a hundred by the end of this year and a thousand in 2016, which may force them to look beyond the four walls of this garage,

"I would say within the month we are probably going to have to move into something a little bit bigger," said Klosinski.

Despite how big they get, the goal is to just keep doing what they love.

"The best thing about this is building something for people to have fun with," said Sego. "This is what we love to do and to be able to build these and make them and sell them. I mean that's a blast right there."

They hope to eventually see these at tailgates all over the country and be able to say they were made in Michiana.