Made In Michiana: Walter Piano Company 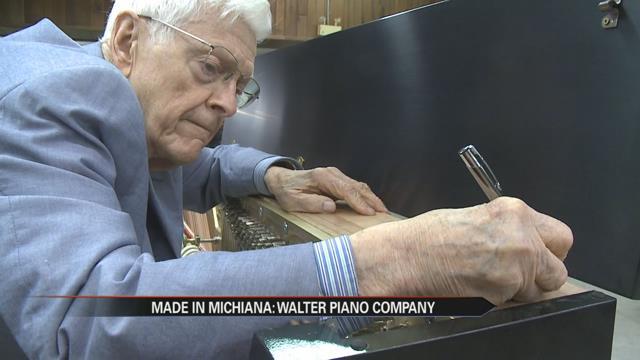 Made in Michiana is taking us inside a 45-year-old family business. Our cameras got the backstage pass on how music is made at Walter Piano Company in Elkhart.

“One thing I appreciate so much in the fact that my parents started the business, is how much they sacrificed and how hard they worked. So it’s a privilege to be a part of the family,” said Rachel Demercurio, Vice President of the Walter Piano Company.

It is a family in the business of building hand crafted, custom made pianos.

“It’s just really special, it is. It’s worth it,” Co-owner Barbara Walters explained.

"When you mass produce you can’t do what we do,” Demercurio added.

And it’s being done right here in Michiana.

The small staff of about 15 is responsible for cutting the wood, drilling the screws, and spraying on that smooth, glossy finish.

One engineer carefully nailed down 494 bridge pins, with patience and precision.

They are turning blocks of wood into beautiful, music making masterpieces.

“It’s wonderful to build pianos. Especially since we have the background and know how to build a quality piano,” Charles Walter said.

It is a quality both recognized and respected worldwide.

“We sell over the world actually. The majority are the United States. We’ve sent pianos to Poland, recently opened a dealer, some to China,” Demercurio explained.

The family credits their passion, diligence, and commitment to building the best, as their reason for rhythmic success.

They don’t rush the process.

Upright pianos can take six to 10 weeks to build.

And the Grand Pianos take even longer.

Once the fine tuning and the final touches are made, the hands on president gives his seal of approval.

And just like that, a piano is ready for a home.

Funny how life works out, they said.

“I thought, let’s go for it. Even though some of my friends said, ‘Are you crazy?’” Barbara Walter laughed.

“Most people would have never made it in the first 10, 15 years because they wouldn’t have been willing to work so hard and sacrifice so much,” Demercurio explained.