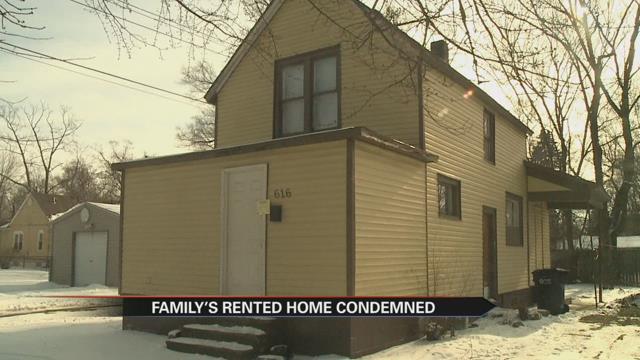 A family of six in Benton Harbor has been kicked out of their home because of major plumbing problems, but who’s responsible for the damages is uncertain.

That’s what Davis found in the basement of the Benton Harbor home she rents on January 15 – the culmination of weeks of problems with her home’s plumbing.

“It will be flooded once again after we leave and be gone,” Davis said, during an interview inside the home on E. May Street.

Davis and her five children moved into the house in mid-November, but they haven’t been able to live in it for the past week.

The basement of the house recently flooded with nearly six inches of sewage water, according to Davis. The single mother managed to drain most of the water from her basement, but piles of used toilet paper and human feces remained scattered across the floor Monday afternoon.

Even though most of the water had been cleaned up, more was leaking from the floor above Monday afternoon.

Along with the basement, Davis’ only bathroom in her house is consistently flooding because the toilet is broken, her kitchen sink leaks and her enclosed front porch has a leaky roof that has damaged a bed set and some of her children’s clothes stored in it.

Davis said she’s been dealing with these problems since the first week she moved, and she’s been consistently texting and calling her landlord for help, but he is no longer answering her.

“Usually a normal person will return the call back the next day, or later on when they un-busy,” Davis said. “He has not returned either of these calls back.”

Davis shared dozens of text messages that she has sent to her landlord, Larry, for this story. They date back to November, when she and her children first moved in, to only a few days ago.

On Jan. 19, a Benton Harbor city inspector found the home to be unsafe and posted a yellow notice on the front door condemning it until repairs – including major plumbing repairs and installing smoke detectors – were made.

“It made me feel like less than a woman as far as, like I let my kids down again,” Davis said.

Davis said she is being forced to find another place to stay, even though her kids like this house.

Larry, the landlord, was eventually reached by phone just after 4 p.m. Monday.

Over the phone, he said he is trying to evict Davis because, according to him, all the damage inside the house is her fault. He said he rents out other properties where his tenants would vouch for him being a good landlord.

Larry said he is intentionally ignoring Davis’ text messages and phone calls until her eviction is approved in court.

Davis said she wants to move out, have her money fully refunded and have her damaged property replaced. Larry said he wants to evict Davis, though he said he won’t ask for the $1,000 he said she owes him.