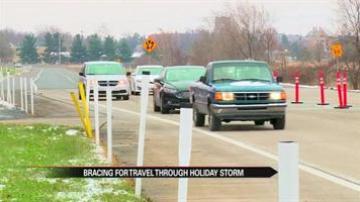 SOUTH BEND, Ind. -- A major storm, nicknamed "Stormsgiving" is threatening to spoil holiday travel all across the country.

On the toll road, some people say they're just trying to get as far as possible before the storm hits. Others say they don't care how long it takes to get there, as long as they get to their destination safely.

AAA says the storm has really bad timing because it is hitting on one of the busiest travel days of the year.

"There's going be about 43 million people traveling. We're expecting the storm to reach the east coast on Wednesday which happens to be the busiest day for travel," said Beth Mosher, Director of Public Affairs for AAA.

Carol Jones and her husband Norris are driving and say they're in no hurry.

"We are worried but our plan has always been to just stop before it gets too bad and stay there until its safe, until the roads are clear," said Carol Jones.

Their journey from Oshkosh Wisconsin to Herkimer New York should take about 14 hours-in good driving conditions.

They'll be lucky to get there for turkey dinner.

"We know we're going to be running into bad weather, but we're ready to just stay at a hotel until its clear driving," said Jones.

AAA says fewer people are traveling this year compared to last, but still - nearly a million Hoosiers are planning to hit the road.

"I'm headed to the Detroit area and we'll probably be there in about 3 hours," said Mitchell Sulfaro, a student at Holy Cross College.

"I don't think it's supposed to be too bad where we're at, but our son lives in Cleveland and he's supposed to get 4 to 5 inches tonight and he's coming home tomorrow," said Kyle Robinett who is driving from Chicago to Bryan, Ohio.

Robinnett says he pushed through a bad storm once-and learned his lesson the hard way.

"We were on our way home from Minnesota one time and crashed in a blizzard and it wasn't cheap and it wasn't fun," said Robinett.

AAA says they plan to service hundreds of thousands of people this holiday and through the end of the year.

Their advice is to slow down and have an emergency kit in the trunk.