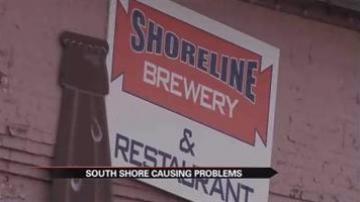 For seven years the Shoreline Brewery has been a staple in the Michigan City community and general manager Tim Jongsma wants it to stay that way. "We’ve got great beer, great food, we are right on the beach. What else do you want? Why would you want to take us down?"

That is exactly what some of the newly proposed routes for the South Shore Line threaten to do. There are seven options Michigan City officials have to consider and two of them would replace the Shoreline Brewery with a new train station or a parking lot.

"It displaces a lot of businesses, quite frankly. It’s going to change traffic patterns, they want to increase the freights, which means there will be more trains," said Jongsma.

So, the Shoreline Brewery has started a petition in hopes of convincing city leaders to choose one of the proposed routes that wouldn’t have so many negative effects on the city. In two weeks, the brewery already has close to 500 signatures and some council members agree with the brewery that putting a new set of tracks on the North side of town is a bad idea.

"We would be taking the most valuable property the city has and then putting in a train station and tracks across it," said Councilman Ron Hamilton, Jr.

Council members said they are looking at all the proposed routes and want to pick the one that will help drive economic development in the area without hurting local businesses like the Shoreline Brewery. That is why council members like Richard Murphy said the city council is not going to rush a decision, "The South Shore has run down 11th Street for 100 years, so I think we recognize this is a 100 year decision we could be making."

The Shoreline Brewery recently purchased a building for a planned expansion that would add close to 100 jobs.

Mayor Ron Meer said he understands that businesses like the local brewery are an important piece of the fabric that makes up the local economy, so he will be taking a closer look at the proposed routes at the South side of town. The mayor also said the city has hired a consultant to weigh in on the project.