Malawian visits ABC57, hopes to build his own TV station in Africa 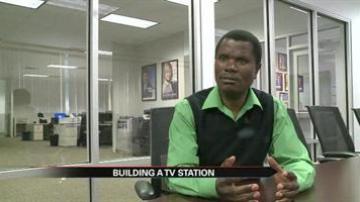 SOUTH BEND, Ind. -- African gospel singer Allan Ngumuya paid a visit to ABC57 Monday to learn how to build a television station in his home country of Malawi.

A celebrity in Malawi, Ngumuya left his country 15 years ago to come to the United States to get a college education.

Now he has several college degrees, including one in video technology from Ivy Tech in South Bend.

He's hoping his education will serve him well as he fulfills his dream of building a television station in Malawi.

"The main goal is to let the people know what's going on around the world outside Malawi," said Ngumuya.

Monday, Ngumuya spent time at ABC57 to learn more about what he'll need to make his dream a reality.

That's only a part of a bigger plan.

He's running for office - for a place in Malawi's Parliament.

"What I've learned here I'd like to share with my people in Malawi. You don't give fish to a friend every day, you need to teach them how to fish," said Ngumuya.

Ngumuya says his two dreams go hand in hand. He hopes the television station will help with his political campaign.