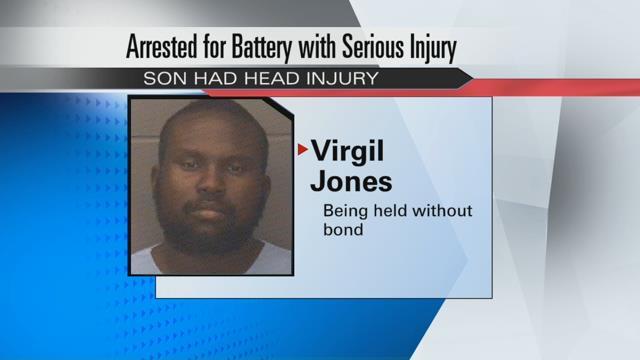 One man has been arrested on charges of battery with serious bodily injury after allegedly battering a 3-year-old child.

Officers from the Elkhart Police Department say they were dispatched to 244 Superior Boulevard at approximately 5:41 a.m. Wednesday regarding the incident.

According to officers, the mother of child said her husband, whom she is separated from, had custody of their children Tuesday night.

She reported receiving a call from the husband, 25-year-old Virgil Jones, advising he needed to take the 3-year-old victim to the hospital.

Police say Jones dropped the other child off at the mother’s residence and that is when the mother noticed the victim was bleeding from his head and called 911.

The victim was transported to Elkhart General Hospital where doctors determined the injuries were serious. The victim was then transferred to Riley Hospital for treatment.

According to officers, detectives determined the Jones had acted out in anger, allegedly causing the head injuries.

Jones will be held in the Elkhart County Correctional Facility without bond.